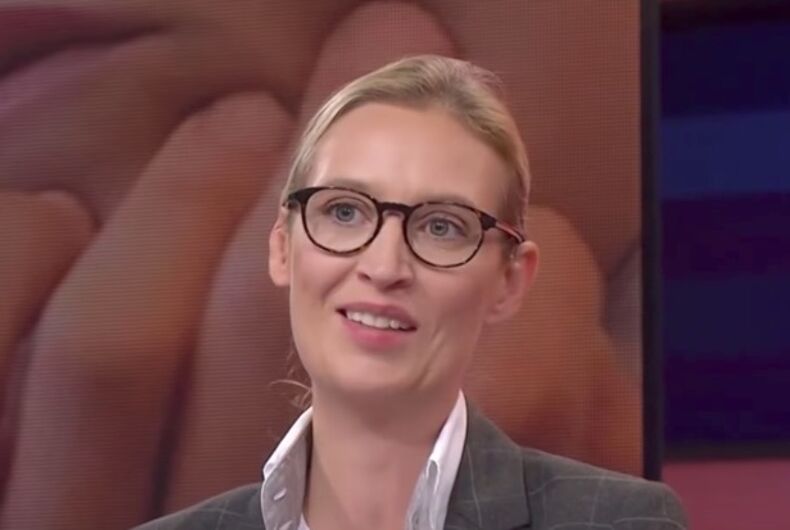 Out-lesbian, xenophobe and racist Alice Weidel has scored a victory in the German parliament, and aims to bring her bigotry back into vogue. Not that Germany has a history of racism or anything…

38-year-old Weidel, married mother of two, heads the Alternative Fuer Deutschland party. The AFD has become the third largest party in the German parliament under her leadership, capturing 12.6% of the vote in the nation’s most recent elections. That rise in power constitutes a major shift, as the AFD—which practices openly racist and nationalistic tactics—has become the first far-right party to gain power in Germany since the Second World War.

The rise of the AFD also means a major headache for German Chancellor Angela Merkel, whom Weidel once referred to as a “pig.” Merkel will now have to work with the AFD on legislation in order to keep her government functioning.

Weidel has a history of employing tactics as bigoted and brazen as her party. Her “pig” comment came in the wake of Merkel welcoming Middle Eastern refugees into Germany. In the past, Weidel has also praised the German leaders of World War II as national heroes.

The rise of the AFD and Weidel comes amid a resurgent right wing in the western world. Events like Brexit and the rise of Donald Trump represent a shift in Europe and the United States to suspicion of immigrants and people of color. Unfortunately, Weidel also represents issues within the queer community already obvious in the United States.

Racist and xenophobic values have infiltrated the queer world, with a number of high-profile queer folks (we don’t need to mention who) speaking out in favor of Trump and his policies of bigotry. These same Trump supporters, rather hypocritically, turn a blind eye to his administration’s anti-LGBT policies.

The same holds true for Weidel, whose AFD party has run ads lamenting the loss of German family values after the legalization of marriage equality in Germany.  It only goes to show how easily some people will compromise their morals and self-interest in the name of fame and money.

Here is an ingenious way to troll antigay bakers