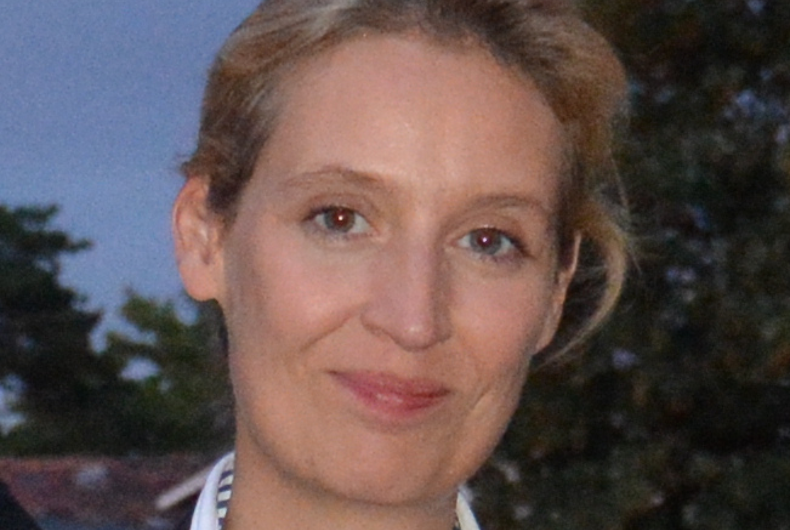 In elections held over the weekend, Alexander Gauland and Alice Weidel were named co-leaders of the German Alternative für Deutschland (AfD) party.

The AfD was founded in 2013 and is known for its euro-skepticism, extreme xenophobia, and opposition to women’s and LGBTQ rights.

Alice Weidel, 38, lives with her partner and their two kids and is openly gay. A former Goldman Sachs banker, she seems an unlikely leader for a party founded on a rejection of globalism and tolerance.

But her politics appear in-line with the AfD’s.

In her acceptance speech, Weidel called for the AfD to “stick together and fight together,” and specifically named “political correctness” a problem. “We don’t want any imported civil wars on German streets. Political correctness belongs on the garbage heap of history.”

When interviewers inevitably ask her how she could be part of a party that opposes same-sex marriage, compares LGBTQ people adopting to making a child a “plaything for the sexual inclinations of a loud minority,” opposes sex education in schools, and advocates for “traditional gender roles” for women, she just responds that she keeps her personal life and her public life separate.

The elections for a new leader were held because the former leader, Frauke Petry, stepped down. Petry previously called for border patrol agents to shoot refugees and other migrants attempting to cross into Germany and compared ethnic minorities to garbage. “What should we make of the campaign ‘Germany is Colorful’? A compost heap is colorful, too.”

Two months ago, Petry was instrumental in removing a racist even more extreme than herself from the AfD. Björn Uwe Höcke, the speaker of the AfD’s parliamentary group, said in a speech that Berlin’s Holocaust Memorial was a “memorial of shame” and that Germans should “make a 180 degree change in their politics of commemoration.”

While Weidel has avoided making many of the more extreme statements that members of her party have made, her co-leader has openly defended them. Gauland previously defended Höcke’s comments by saying that Germany has a “cult of guilt” around the Holocaust. “We want our homeland, our identity and we are proud to be Germans,” Gauland said in his acceptance speech.

The AfD currently has no seats in Germany’s legislature but that could change in elections scheduled for September of this year as the party has gained representation in state-level parliaments over the last couple of years.

In Germany, people don’t vote for the leader of the country directly. Instead, they vote for members of the legislature, and the legislature will choose the new chancellor, which means that the party leaders are the focal point of national elections.