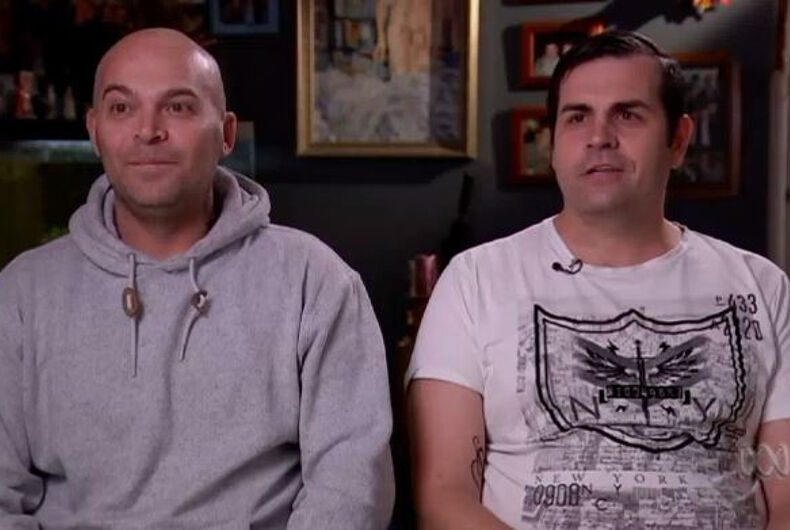 Australia is in the midst of considering bringing marriage equality to its citizens, with a postal survey expected to show the people are ahead of their slow moving government on the issue.

But not all Australians are on board, including a gay couple who recently spoke with ABC Australia about why they are voting no on marriage equality.

Ben Rogers and Mark Poidevin met on a dating site 15 years ago, and have been together ever since, committed to staying together for life, but unwilling to get married.

Why? Religion and the slippery slope logical fallacy argument.

Poidevin proposed to Rogers five years ago, only to be told he didn’t believe in same-sex marriage. Poidevin, described as a “committed Catholic” has now come to Jesus about the joys of inequality under the law as well. Because, after all, if we allow the queers to marry, where do we stop?

“If we make one exception for one community, that being the same-sex couples, where does it stop?” he said. “Do we then see other cultures being allowed to have multiple marriages? Do we see the age of consent being lowered for another group of minorities? That is my concern, of where it would lead.”

Notably, an outbreak of “Screw it, everyone can marry anyone they want to” has not occurred in any of the nations that have legalized same-sex marriage.

He adds that the couple has faced allegations of homophobia.

Ideas, on the other hand, are up for debate, and his arguments are, to put it politely, lacking.

While polls have showed huge support for marriage equality in the country, Poidevin thinks the polls could be getting it all wrong.

“This could be the Brexit or Trump moment for Australia, where the polls are saying one thing but you go to the ballot box and people are clearly in another mind, going to vote another way,” he said.

LGBTQ rights advocates had been pushing parliament to decide the issue without a postal survey, arguing that it would open the door for hateful rhetoric that could be damaging to the community, particularly the youth.

Proving their concerns valid, anti-LGBTQ posters with vile messages, some appearing to be from a white supremacy group, have shown up on the streets of major Australian cities.

A video interview of Rogers and Poidevin explaining their views is available on the ABC Australia website.