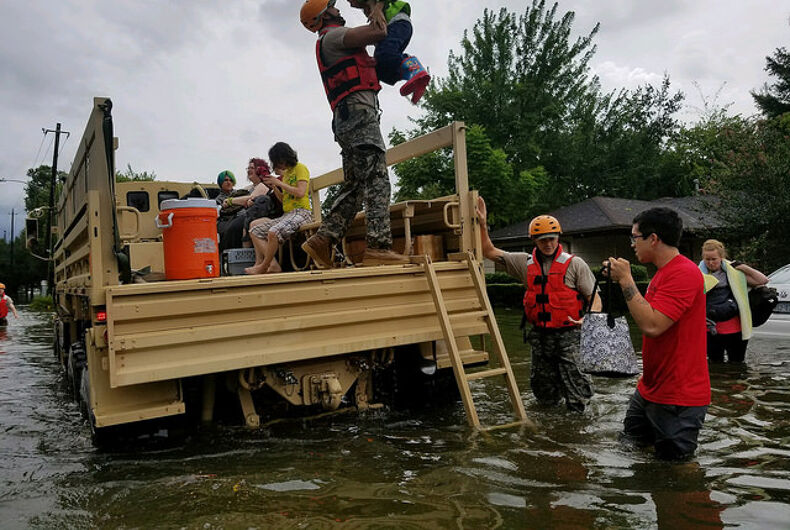 Whenever a natural disaster strikes, Christian religious leaders quickly pull out their favorite scapegoat and start flogging away. For some reason, it always seems to be LGBT people who are to blame.

“Jesus sends the message home, unless Americans repent, unless Houston repents, unless New Orleans repents, they will all likewise perish,” Swanson said on his radio program today according to Right Wing Watch. “That is the message that the Lord Jesus Christ is sending home right now to America.”

He went on to say the city had elected a “a very, very aggressively pro-homosexual mayor” (she’s a lesbian) and is “persecuting pastors and churches.” And warned that the storm was on it’s way to Louisiana because they gay festival Southern Decadence was being held this weekend.

God is giving the city a “head’s up” before it hosts “the largest sexual perversion event in the country” Swanson said. “Is anybody paying attention in New Orleans?” Unless you repent, you will likewise perish.”

Related: Get to know the Christians who’d like to execute you — and the Republicans who court them

In similar news, the Christian website World Net Daily marked the anniversary of Hurricane Katrina – which hit New Orleans 12 years ago shortly before the Southern Decadence party – by republishing an article that says, you guessed it, gays caused that hurricane too.

“Although the loss of lives is deeply saddening, this act of God destroyed a wicked city,” according to Repent America director Michael Marcavage in the old story. “From ‘Girls Gone Wild’ to ‘Southern Decadence,’ New Orleans was a city that opened its doors wide open to the public celebration of sin. May it never be the same.”