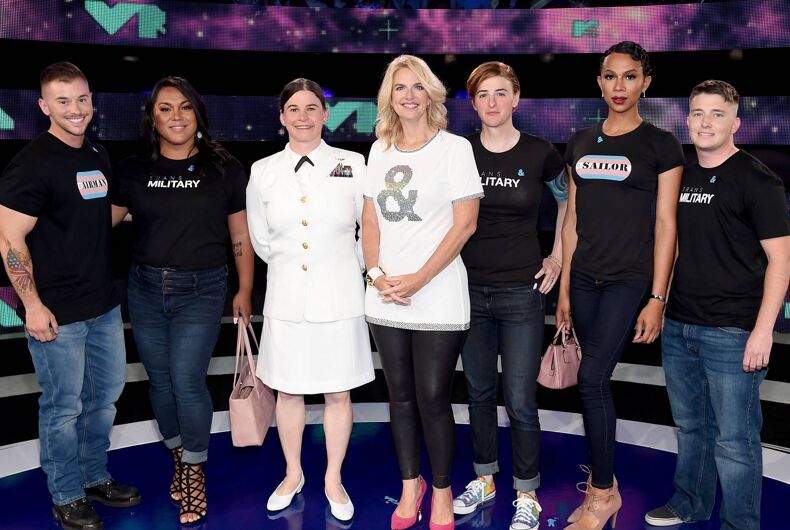 Transgender issues came up a couple of times at the Video Music Awards last night.

“Any patriot who is putting their own life at risk to fight for our freedom and stand for equality is a hero at MTV, and to young people everywhere,” he said in a statement.

Their appearance was a response to Donald Trump’s attempts to ban transgender people in the military.

“It’s hard to care about trans service members as a generic, but when you learn the stories of people like Sergeant Ireland and Akira, all these people, and you can put a face and a name to it, it matters,” Peace said during the pre-show.

P!nk also related a moving story about her gender non-conforming daughter during her acceptance speech for the Video Vanguard Award.

Her 6-year-old daughter Willow said, out of the blue, “Mama, I’m the ugliest girl I knew.”

P!nk asked her why, and she said because “I look like a boy with long hair.”

She then made a Powerpoint presentation for her daughter, showing her pop icons who defied gender norms, like Freddie Mercury, Annie Lennox, and Prince.

P!nk then said that she has faced criticism for her gender non-conforming appearance. “They say that I look like a boy, or I am too masculine – too many opinions, my body is too strong.”

The answer, P!nk said, is not to change. “We take the gravel and the shell, and we make a pearl. And we help other people to change, so that they can see more kinds of beauty.”

This cute gay couple got engaged on stage at DragWorld

Caitlyn Jenner got destroyed by a trans activist for supporting Trump