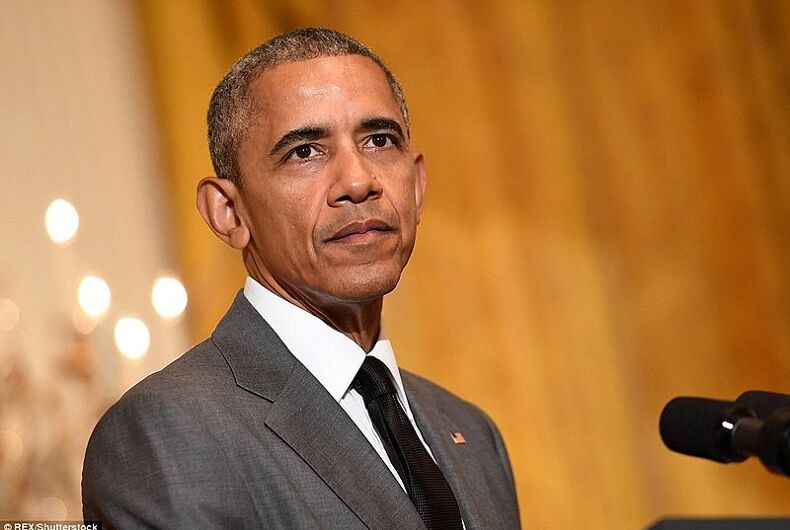 Barack Obama is now getting blamed for Charlottesville. Photo: Politic on Wikimedia Commons

Republican Rep. Bryan Zollinger of Idaho shared a ridiculous conspiracy theory post from a site ironically called American Thinker positing that the white supremacist rally in Charlottesville was the work of Barack Obama and the Democrats.

“I’m not saying it is true, but I am suggesting that it is completely plausible,” Zollinger wrote on Facebook, the Idaho Falls Post Register reports.

“The conflagration in Charlottesville is beginning to feel like a set-up, perhaps weeks or months in the planning,” the American “Thinker” post reads, offering no evidence.

“We know that Obama and his inner circle have set up a war room in his D.C. home to plan and execute resistance to the Trump administration and his legislative agenda,” it continues, citing a debunked claim originating from a tabloid story with one unnamed source.

It also goes on to question if the events were also planned by billionaire George Soros, Virginia Gov. Terry McAuliffe or Charlottesville Mayor Mike Signer, or all of them working together.

Zollinger told the Idaho Falls Post Register that upon further reflection, the claims are “probably wrong” but still “plausible.”

“In hindsight, maybe it was a mistake to post it,” Zollinger said. “I didn’t mean for it to ruffle any feathers.”

Conservatives have been in overdrive trying to blame the violence and death in Charlottesville on Democrats, with Alex Jones suggesting the supremacists were Hollywood actors hired by the Democrats and anti-LGBT pastor Scott Lively blaming the so-called “deep state.”

Meanwhile, Kentucky Gov. Matt Bevin has linked it to removing the Bible from public schools.

Why do white supremacists hate Jews? Aren’t they white too?

You can buy a Steve Bannon fidget spinner from Breitbart now, but why would you?