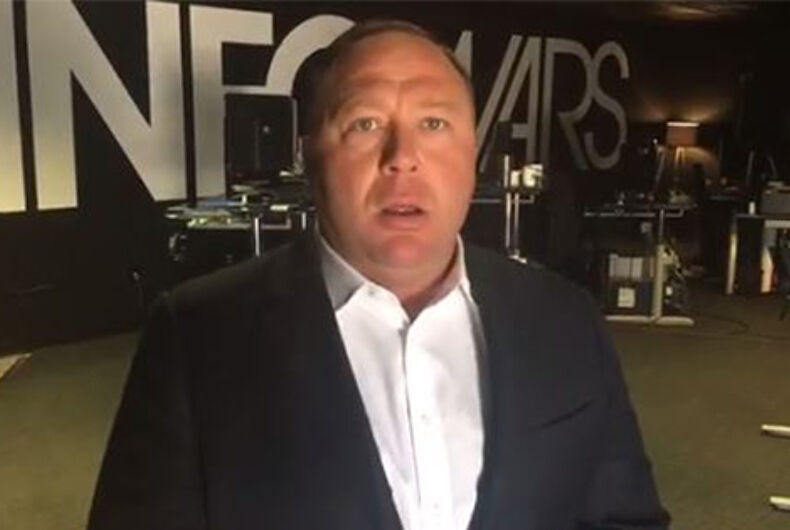 It would be nice to live in a world where we could ignore the insane conspiracy theories coming out of the mouths of professional faker Alex Jones. But as Pizzagate has shown, as Charlottesville has shown, and as Trump’s continued praising of Jones has shown, we do not live in that world.

Jones’ latest unhinge rambling rant claims that everything you are seeing is the exact opposite of the truth. In other words, another day in crazy town for Jones and his feeble minded followers.

After the “Unite the Right” gathering showed that there are neo-Nazis loud and proud standing on the right side of the aisle, people like Jones have to try to spin the situation 180 degrees and attempt to convince people that Democrats are the real fascists.

“The Democrats are taking on the part of Hilter, literally, and then all of the whites and Christians are the Jews,” Jones says, almost seeming to believe himself.

He claims Democrats were planning to have “race riots to bring in civil emergency” if Hillary Clinton was elected, and are now “pushing (for) it harder now that Trump is in (the White House).”

“So they advertise, and they have a ‘Unite the Right, don’t be racist’ rally. And then of course guys with torches come, and you look at them, most of them are actors. You can even look up their names, they’re Democratic Party operatives. They’ve been caught painting swastikas on black people’s places, and burning crosses, they always get caught,” he continues.

Meanwhile, people are outing those who attended the “Unite the Right” rally, finding them to be exactly what you expect: Regular, run-of-the-mill racists, at least one of whom is out of a job, and the rest will likely face an uphill battle finding and maintaining gainful employment now that their names are synonymous with one of the largest hate rallies in modern America.

“So I look at the white nationalists last night that were leading this deal, I mean they’re straight out of Hollywood, man,” he continues. “With the little white shirts and the Hitler haircuts. And then some of them, you track them and it comes out they are Southern Poverty Law Center operatives.”

You can watch the full 45-plus minutes of madness for yourself below. As you do, remember that our president, who took three days to condemn the white supremacists responsible for the violence and death in Charlottesville, said that he hoped he would make Jones proud.

Bullied to death: 8-year-old hangs himself after constant torment by classmates

Trump is accomplishing his goal to ‘Make America Hate Again’