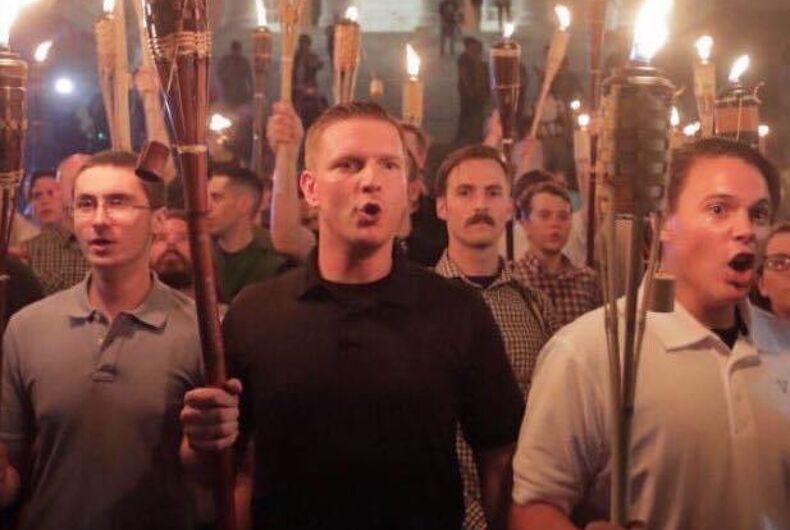 Not only do they include 15 links to the org’s donation page as Joe notes, they grouse that Trump hasn’t issued a “religious freedom” executive order they covet. It would amount to a license to discriminate against LGBT people.

Who do they blame for Trump’s decision not to issue the order so far? Jared Kushner and Ivanka Trump.

The group’s Executive Director, Brian Brown, rights that Trump is being “fiercely lobbied against protecting people of faith by his own family members.” Both Kushner and Trump are Jewish. They are people of faith.

Worth noting: Many of the Charlottesville neo-Nazi attendees were shouting slogans like “Jews will not replace us! Jews will not replace us!” as they marched through the streets wielding their tiki torches. Many of the white nationalist groups, like “Unite the Right” rally hate group “The League of the South” want to create a Christian theocratic state as part of their pursuit of a “godly nation.”

It goes without saying that the biggest area of conflict over religious liberty involves issues involving marriage and gender, things that LGBT extremists are working to push. Countless people have been sued, fined, punished, even jailed simply because they do not want to be involved in something like gay ‘marriage’ that violates their religious beliefs.

President Trump has twice been presented with draft Executive Orders that would provide critically needed legal protections for people of faith who believe in marriage as the union of one man and one woman. On both occasions, it’s been widely reported that he would sign the pending order, but then on both occasions he failed to do so. Media reports suggest that he is being fiercely lobbied against protecting people of faith by his own family members – Jared Kushner and Ivanka Trump.

NOM has worked hard to pressure the administration into acting to protecting our religious liberty rights including producing two videos, and flooding the White House with thousands of calls and emails demanding action. But we need to do more, and that’s a key reason why I am asking for your support. Will you help? Please help us fight for the rights of Americans to be free from discrimination, persecution and punishment simply because they believe in marriage as God created it – the union of one man and one woman.

It’s worth saying again, that the attacks on people of faith over marriage and gender are a direct result of the anti-constitutional, illegitimate decision of the US Supreme Court imposing gay ‘marriage’ on the nation. This has emboldened the left and heightened their attacks on our people. Whether it takes two years or two decades, NOM is committed to reversing this outrageous court decision and restoring marriage to our nation’s laws.

But until we can restore marriage, we need to contain the damage of the marriage decision by enacting legal protections for people to continue to live the truth of marriage as one man and one woman in their daily lives and at work. Please help us fight for marriage and religious liberty by making a generous financial contribution to NOM today. Your gift is fully tax deductible, and will be greatly appreciated.