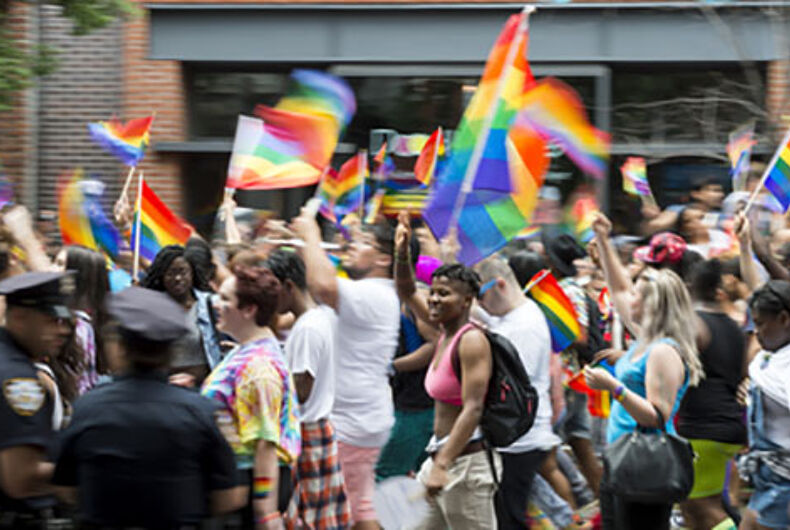 Researchers who polled Americans about their attitudes on bias found that the racial and ethnic groups which were most likely to sympathize with the struggle of the LGBTQ community are blacks and Hispanics, not whites. And while these minorities said they, too, are often the victims of discrimination, the report found many whites don’t see that they are.

This snapshot picture of prejudice in America by the Public Religion Research Institute reveals that those who identified as black or African-American were more likely than any other group to perceive discrimination against gay, lesbian or transgender people.

The study by PRRI found of the African-Americans surveyed, close to three-quarters, or 73 percent said gays and lesbians face a lot of discrimination; 72 percent of that same group said transgender people were victims of bias.

A slight majority of white Americans surveyed said they perceived significant discrimination against gay and lesbian — 54 percent — and against transgender people —59 percent.

However, fewer than half — 49 percent — of Asian-Pacific Islander, or API Americans reported they believed gay and lesbian people face a great deal of bias. The number of API Americans who said the same of transgender people was 55 percent.

LGBTQ Nation reached out to the researchers’ media team for an explanation as to why discrimination against bisexuals, commonly called biphobia, was not represented in the report, and research director Dan Cox emailed this statement:

Our LGBT identity question includes people who are gay, lesbian, bisexual, and transgender.

Although the numbers varied by age and of course by political affiliation, one surprising finding was the lack of support for same-sex marriage among those identifying as African-American or black.

The report does note a five percentage-point increase in support for same-sex marriage among black Americans from 2015.

Although fewer than half of Asian-Pacific Islander Americans perceived gay and lesbians to experience a lot of discrimination, a strong majority —69 percent — reported that they supported same-sex marriage.

When it came to religious support for marriage equality, the group that recorded the most dramatic shift in support for same-sex marriage was white mainline Protestants. According to PRRI, 63 percent of white mainline Protestants said they supported same-sex marriage; that’s a 27-point increase from 2003, when only about one-third said they were in favor.

PRRI also broke down bias by religious groups, and found white Christians were consistently the least likely to perceive discrimination against LGBTQ Americans. According to the report, white evangelists ranked near the bottom, and Unitarian, Universalist, black Protestants, and unaffiliated Americans were at the top of the survey, in response to the question, “is there a lot of discrimination against gay and lesbian people/transgender people?”

Discrimination against the LGBTQ community wasn’t the only blind spot for whites, according to the survey.

The numbers did shift when age demographics were considered. More than six in ten white young adults ages 18 to 29 said they agreed that blacks face a considerable amount of discrimination, while fewer than half — 43 percent of white seniors ages 65 or older agreed.

In contrast, 58 percent of political independents and 77 percent of Democrats agree blacks experience a great deal of discrimination.

Read the full report by PRRI, including how discrimination against immigrants is perceived, at the institute’s website.

Editor’s note: an earlier version of this report used the term “bisexual erasure” instead of “biphobia.” It has since been corrected. We regret the error.

Puerto Rico takes first step toward equal rights for all