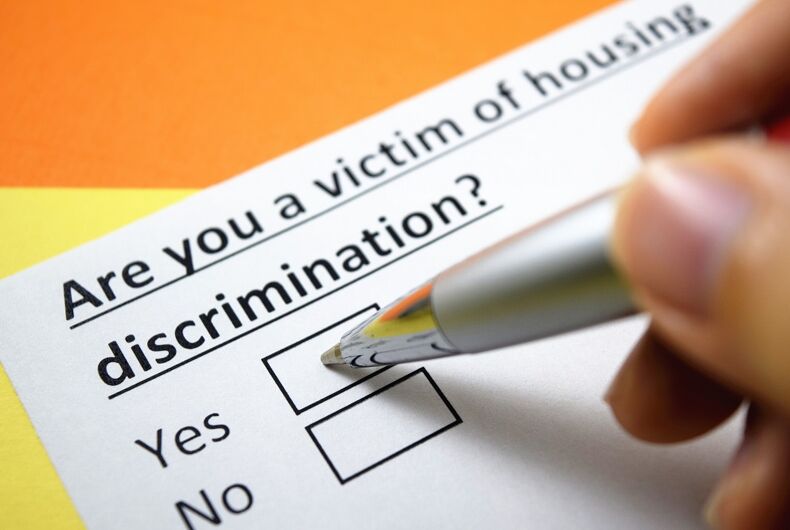 Those are just some of the results of a new study released by the Urban Institute on LGBT housing discrimination. The study recruited pairs of testers who were generally the same in terms of demographics, told them to both contact a realtor and ask to see an apartment, but one person in the pair said they were in a same-sex relationship and the other said they were in an opposite-sex relationship.

According to the researchers, this is one of the few studies on LGBT housing discrimination to go beyond surveys. Surveys are cheaper and easier to run than this study’s methodology, but they can only catch the most blatant forms of discrimination. You would notice if a landlord emailed you and said they don’t want to rent to a queer couple, as one couple who then sued was told. But you would not know that a straight person of the same race, age, gender, and qualifications as you would be more likely to be told about a better deal.

“The pilot study results, though not generalizable, add to the emerging picture of discrimination in the housing market against lesbians, gay men, and transgender people, and lay the groundwork for more expansive studies of this kind,” Urban Institute senior research associate Diane Levy told NBC.

The results are in-line with those found several years ago by the Department of Housing and Urban Development, where thousands of housing ads were responded to by email. Some emails identified the sender as part of a same-sex couple, the rest as part of an opposite-sex couple. The study found that gay people were less likely to get a response.

For the sexual orientation part of the Urban Institute study, researchers recruited 1800 pairs of testers in the Dallas-Fort Worth area and the Los Angeles area. The two people in each pair were the same in terms of gender, race, age, and ethnicity, and they independently contacted a property manager to look for an apartment. At some point in their initial conversation with the property manager, each person in the pair mentioned the name of their partner. One person used a female first name, and the other used a male first name. All testers presented themselves as in a relationship but without children.

This allowed researchers to see how property managers reacted to sexual orientation. Since the testers presented similar qualifications and came from similar demographics, researchers could see if the testers who appeared gay were treated differently from those who appeared straight.

Researchers found that the lesbian women and heterosexual women were equally likely to get an appointment with the property manager. Across some of the other measures, lesbian women were treated slightly worse, but the differences were not statistically significant. This does not necessarily mean that there is no discrimination.

Gay men, though, were treated worse than straight men to a greater degree. Property managers were less likely to schedule appointments with gay men in the study. If they did get an appointment, gay men on average heard about one property less than a straight man would hear about. The average yearly cost quoted to gay men for housing were $272 higher. The differences persisted across races and ethnicities, and it didn’t matter if the testers contacted property managers online, by phone, or in-person.

This is just one test on two cities, but it’s evidence of widespread discrimination. The study was large and the research methods sound.

The transgender part of the study was much smaller because it was more of a precursor for a future study, a way to test the testing methods. 200 pairs in the Washington, D.C. area were recruited. One person in each pair was cisgender, the other was transgender. Trans men were paired with cis men, trans women with cis women, and non-binary people were randomly paired with a cisgender man or woman of similar age, race, and ethnicity. Half of the transgender testers identified themselves as trans by mentioning that they were worried that the gender on their ID didn’t match how they presented (which should not bar them from getting housing), and half didn’t.