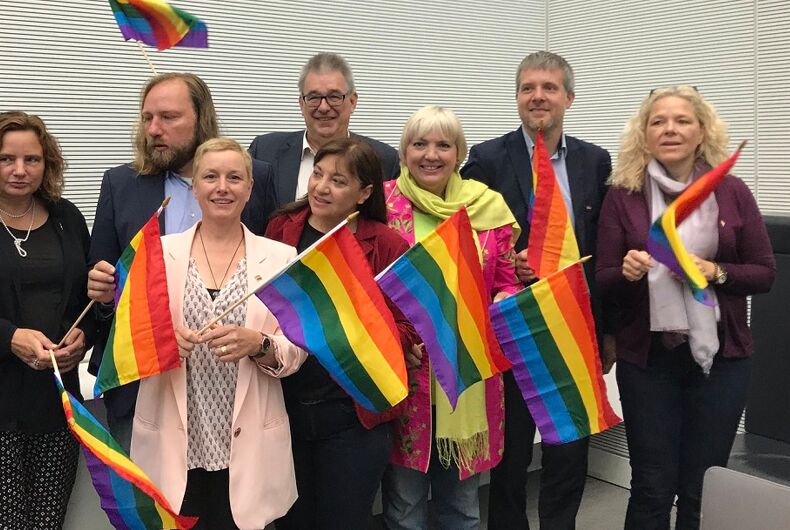 In a hastily scheduled vote last Friday, Germany’s Bundestag, the lower house of parliament, voted to open marriage up to same-sex couples in a 393 to 226 vote, with 4 abstentions. The upper house is expected to do the same next week.

Those 393 votes in favor of marriage equality include all 6 of Germany’s Muslim members of parliament. Ekin Deligöz, Omid Nouripour, Cem Özdemir and Özcan Mutlu of the Green Party, Aydan Özoguz of the Social Democratic Party, and Cemile Giousouf of the Christian Democratic Union confirmed to the German paper Welt that they identify as Muslim.

Germany’s far-right party, Alternative für Deutschland (AfD), responded to marriage equality with the same sense of doom that American homophobes are accustomed to using. The front page of their website is a death notice that reads, “In deep sorrow, we say good-bye to the German family, whose constitutional protection was buried by the ‘representatives of the people’ at the German parliament.” The other part of the death notice announces that freedom of speech is dead, because the far-right doesn’t see the difference between not having the final word on a topic and having no say on a topic.

One of the party’s co-leaders, Alexander Gauland, told the Bild Zeitung that the AfD is considering a lawsuit. “We are currently studying a challenge at the constitutional court,” he said, without specifying details about the challenge.

While polling has shown that a majority of German people favor marriage equality, Angela Merkel and Cemile Giousouf’s Christian Democratic Union is opposed. Last week, though, Merkel said that she would allow a vote, possibly to prevent this from becoming a campaign issue in Germany’s elections in September.

Young man stoned in the street by homophobic ‘gang’