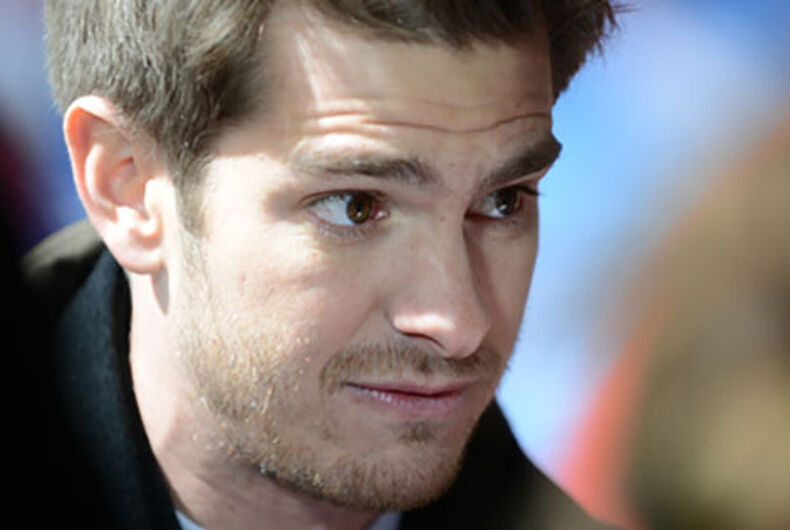 Andrew Garfield is not gay, “as far as I know,” said the actor previously known for his role as the second Spider-Man. He was responding to a curious questioner in a Q & A session, attended by a reporter for Gay Times magazine. But wait: there’s more.

Maybe I’ll have an awakening later in my life, which I’m sure will be wonderful and I’ll get to explore that part of the garden, but right now I’m secluded to my area, which is wonderful as well. I adore it, but a big concern was what right do I have to play this wonderful gay role?

Good question, considering his next statement about what he did to prepare for “this wonderful gay role” in a revival of Tony Kushner’s iconic play, “Angels in America.”

To play a gay man diagnosed with AIDS, Garfield binged on RuPaul.

My only time off during rehearsals – every Sunday I would have eight friends over and we would just watch Ru. This is my life outside of this play. I am a gay man right now just without the physical act – that’s all.

That sound you just heard was a million gay men (and lesbians and their allies), each typing 140 characters or less.

Andrew Garfield: RuPaul's Drag Race and Tony Kushner made me gay
Me: pic.twitter.com/iear2N1XVz

This article grosses me out.Ur a talented guy,but seem to be completely oblivious to what is coming out of ur mouth. https://t.co/td9DPhVRmP

andrew garfield: i am a gay man right now JUST WITHOUT THE PHYSICAL ACT
me: https://t.co/cxI6NHNDNj

Straight tourists who try on oppression for kicks make me so tired. Andrew Garfield and James Franco… guys… you will never understand.

Oh, well in that case, I'm a lesbian without the physical act because I watch Ellen 🙄🙄🙄

"I adopt the parts I like about gay culture without dealing with any of the consequences of living as gay!" NEWP

As Refinery 29 pointed out, this isn’t Garfield’s first time being cast as a “fish out of water.” In 2014, The Hollywood Reporter told the story of Garfield’s role as a transgender woman in a music video for Arcade Fire’s “We Exist.”

Against Me! singer and out trans woman Laura Jane Grace blasted that performance on Twitter:

Dear @arcadefire, maybe when making a video for a song called “We Exist” you should get an actual “Trans” actor instead of Spider-Man?

But if it’s wrong if it’s trans-face — like out actor Matt Bomer playing a trans prostitute in Anything — is it wrong for a straight man to play a gay man, or vice versa? Bomer’s executive producer on that film, Mark Ruffalo, is a straight man who played gay alongside Bomer in The Normal Heart.

Given Eric McCormack’s long-running performance as Grace’s gay roommate on Will & Grace, his fans clearly think it’s okay for straights to play gay. Plus, Hollywood is chock-full of gay men playing straight, going back all the way to Rock Hudson. And obviously, one doesn’t have to have AIDS to play someone living with the virus.

The issue here isn’t that Garfield is or isn’t gay. Hellooo, maybe he’s bisexual? The heart of the matter truly is his poorly chosen words, implying watching a television reality show featuring drag queens effectively made him gay without ever engaging in sex with another man.

Our advice: don’t knock it if you haven’t tried it.

And next time, maybe just avoid “coming out” until you actually are out, if you ever are. Exploring your sexual identity and even your gender identity is a healthy thing to do, but it’s hardly wise to do so in the tabloids, for fear of alienating and objectifying your most marginalized fans.

It’s hard enough, Andrew, without you giving other straights the impression being LGBTQ is something you can put on and take off like a Spider-Man costume. Or by watching TV. I’m a big fan of The Walking Dead and have yet to become a zombie (although as a single mom raising three kids, there are times I resemble one).

An apology at your earliest convenience would be wise.