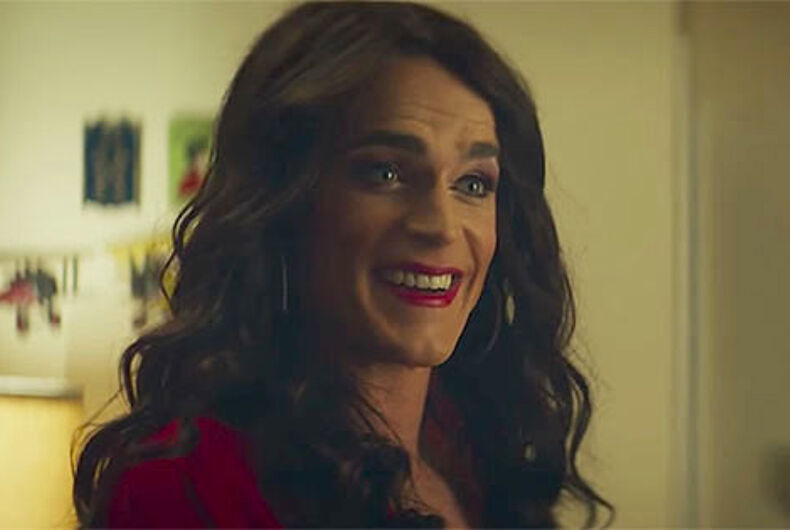 We’re finally getting a look at Matt Bomer playing a transgender woman in the movie that took a ton of heat when it was revealed that Mark Ruffalo had cast the cisgender gay actor instead of someone actually trans. The movie, Anything, is about to have its world premiere.

Bomer stars as Freda Von Rhenberg, a sex worker who lives next door to a straight man from the Deep South, Early Landry, played by John Carroll Lynch. The plot centers around the Mississippi native moving to Los Angeles after losing his wife, to be cared for by his over-protective sister, played by Maura Tierney. Landry escapes her clutches to start a new life, reported Deadline Hollywood, and eventually begins an intense relationship with Freda.

To the Trans community. I hear you. It's wrenching to you see you in this pain. I am glad we are having this conversation. It's time.

The cause of casting trans actors to play trans roles has an ally in award-winning actor Jeffrey Tambor, the cisgender star of Transparent who has publicly challenged Hollywood to “give transgender talent a chance.”

Here are the names of all the cisgender people associated with the film, in addition to Ruffalo, Bomer and Lynch: actors Melora Hardin and Margot Bingham, Oscar-winning cinematographer James Laxton, producers Louise Runge, Ofrit Peres and Micah Hauptman doubles as an actor and producer. Scott Wexler and Great Point Media’s Robert Halmi and Jim Reeve are executive producers along with Ruffalo. The film is written and directed by Timothy McNeil, based on his 2007 play of the same name. One thing that’s changed: his original play a decade ago described Freda as a “transvestite.”

And here are the names of all the transgender people we know of, who either were cast or were involved in the production: Isley Reust is a trans woman who told LGBTQ Nation she wrote the music and score for Anything. Kylene K. Steele was an associate producer and personally worked with Bomer, as shown in a video on YouTube. She posted on Facebook that she “worked so hard together on the development and honesty of the character; I am truly touched by his openness and commitment to developing Freda with authenticity.”

Trans actress Jamie Clayton of Sense8 was initially blocked by Bomer when she called into question his casting. Actress, writer and activist Jen Richards revealed she tried out for a part in a supporting role, and had conversations with Ruffalo and the film’s casting team about the problematic message casting a cisgender man as trans sends.

We’re basically telling the world trans women are just men performing gender. I can’t stand that or let that go unchecked. I think cis people who take these roles, do these movies, and greenlight these shows have to be confronted with that reality that they are morally complicit in the discrimination and violence trans people face and need to do better.

Richards returned to the subject Wednesday with a new tweet storm, explaining the problem with both words and photographs.

Editor’s note: this report was updated to include new comments from Jen Richards via Twitter and to add Kylene Steele and Isley Reust as the two transgender people associated with the film, as far as has been confirmed thus far.

This guide to charities is now flagging dozens of hate groups

When is it okay to use the n-word?