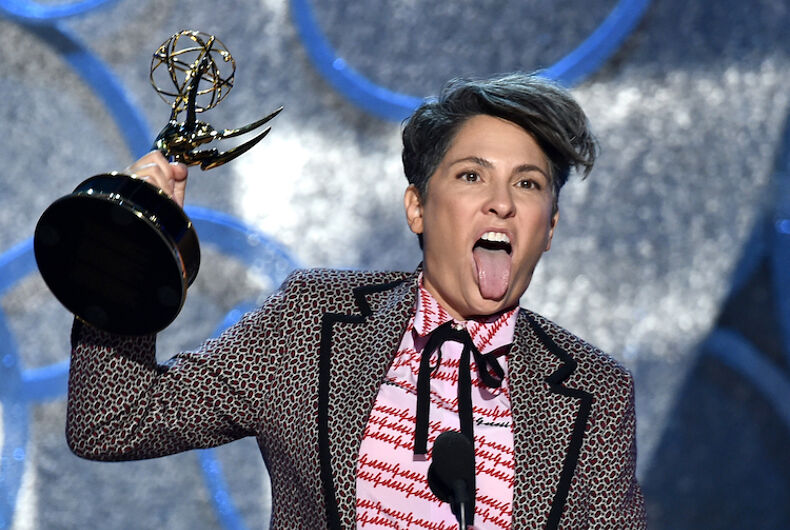 Photo: Photo by Vince Bucci/Invision for the Television Academy/AP Images

Inclusivity reigned at the Emmy Awards in Hollywood this year, with a record number of diverse nominees, presenters and winners.

No one rocked the red carpet harder than Laverne Cox, who channeled Beyoncé’s 2005 gown with a stunning beaded gold dress, and wore her hair in similar soft, face-framing waves that simply slayed, Bustle reported. The actress presented the award for Outstanding Directing for a Variety Special, in which Beyoncé was nominated for Lemonade but lost to Grease: Live.

She wasn’t a nominee this year but made history in 2014 as the first out transgender actor to be nominated for an Emmy. Cox stars as Dr. Frank-N-Furter in Fox’s reboot of Rocky Horror next month.

Among those taking home awards, out lesbian Jill Soloway won the Emmy for Best Director of a Comedy Series, for Amazon’s Transparent. “Topple the patriarchy!” Soloway shouted at the end of an emotional acceptance speech calling on Hollywood to hear the voices it has too long ignored.

“He’s otherizing people. He calls women pigs if they don’t look like beauty pageant contestants. He blames Muslims and Mexicans for our problems. He makes fun of disabled people. This is otherizing with a capital O. And has been used in our history before to start and win wars, and he needs to be called out every chance he gets for being one of the most dangerous monsters to ever approach our lifetimes. He’s a complete dangerous monster and any moment that I have to call Trump out for being a inheritor to Hitler, I will.”

And she was hardly the only one to take shots at Trump, which comes as no surprise in left-leaning Hollywood. Democratic nominee Hillary Clinton tweeted congratulations to out lesbian Kate McKinnon for Outstanding Supporting Actress in a Comedy Series for her work on Saturday Night Live, which includes playing Clinton.

Congratulations on your Emmy, Kate! Big fan of yours, too. pic.twitter.com/w00QO1GwyH

Out lesbian Sarah Paulson gave her partner a shout-out when she won the Emmy for Outstanding Lead Actress in a Miniseries or Movie for her role as prosecutor Marcia Clark in American Crime Story: The People v. O.J. Simpson. Paulson declared. “Holland Taylor, I love you!”

Transparent’s Jeffrey Tambor, in his acceptance speech for his second Best Lead Actor Emmy, made a plea for Hollywood to hire transgender actors and actresses, a plea that many in the trans community have made for years: “To  you people out there, you producers and network owners, and agents, and you creative sparks, please give transgender talent a chance,” said Tambor. “Give them auditions. Give them their story. Do that. And also, one more thing: I would not be unhappy were I the last cisgender male to play a female transgender on television.”

Tambor also thanked the transgender people who had served as his “teachers” for the role, including Van Barnes, Rhys Ernst, Zachary Drucker, and Jennifer Finney Boylan.

Transparent also won the Emmy Award for Outstanding Limited Series, which is a win for yet another out lesbian, producer Nina Jacobson.

Interview: Why did this bicurious man choose to become a eunuch?