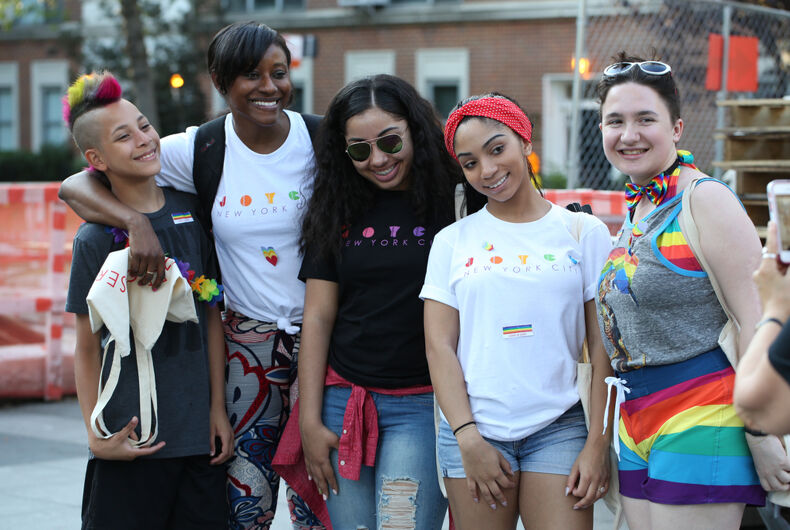 Facebook’s official policies distinguish between hate speech and self-referential use of words that can be used as slurs, but a growing number of lesbians are complaining that the social media giant is punishing them for using the word “dyke” in a positive way.

“We have been deeply disturbed to learn that there has been a rash of post deletions and bans by Facebook for women that post status updates with the word ‘dyke’ in their posts,” the women behind the website Listening to Lesbians wrote in an online petition. “Many of us are on our second or third ban. Some of us got banned again and again, within mere minutes of logging back on for the first time after a recent ban had been lifted. We have had reports that these consecutive bans included posts that lesbians had posted on their own walls days to weeks in the past.”

The couple behind the website Listening to Lesbians, Lisa A. Mallett and Liz Waterhouse, recently launched the petition calling on Facebook to investigate why so many posts by self-identified dykes have been removed, despite the fact that the social media site’s policies attempt to carve out protections for self-referential use of reclaimed slurs.

In the meantime, people are trying to test Facebook by posting the word to see if they can trigger the alleged censorship.

I hear you're not allowed to say "dyke" on Facebook anymore. So I'm gonna see what happens.#dyke

Amid the concerns about possible bias, some blame faulty artificial intelligence models or the reliance on human monitors outside the United States tasked to move quickly through posts that may contain culturally-specific content.

Facebook’s Vice President of Public Policy Richard Allan explained on June 27 how the company distinguishes between hate speech and self-identification:

On other occasions, people may reclaim offensive terms that were used to attack them. When someone uses an offensive term in a self-referential way, it can feel very different from when the same term is used to attack them. For example, the use of the word “dyke” may be considered hate speech when directed as an attack on someone on the basis of the fact that they are gay. However, if someone posted a photo of themselves with #dyke, it would be allowed. Another example is the word “faggot.” This word could be considered hate speech when directed at a person, but, in Italy, among other places, “frocio” (“faggot”) is used by LGBT activists to denounce homophobia and reclaim the word. In these cases, removing the content would mean restricting someone’s ability to express themselves on Facebook.

Petition organizers say that posts using a hashtag before the word “dyke” seem less likely to be censored.

“We also reject the idea that we must use a hashtag in front of our identity in order to not get banned,” Lisa wrote. “We demand they follow their own stated policy, and allow us to use our own word in order to avoid restricting our ability to express ourselves on Facebook.”

But the fact that the petition makes no mention of other women who might identify with the word “dyke,” including bisexual and transgender women, raises questions about whose rights the group is fighting for.

One of the campaign’s promoters, attorney Tina Minkowitz, has previously asserted opposition to the inclusion of trans women in women’s spaces.

“[F]emale-only space is under attack from transgender activists, who also attack women’s freedom of speech when we dare to say that female reality can’t be trampled under males’ gender identities,” Minkowitz wrote in a 2015 comment on a post about misogyny in social justice movements.

And the editors of Listen to Lesbians have criticized musicians for pulling out of the famously transphobic and now defunct Michigan Womyn’s Music Festival.

There also seems to be some overlap between those speaking out against the so-called #FacebookDykeBan and transgender-exclusionary radical feminists, also known as TERFs. The post below includes the hashtag #Transcult, which accompanies posts discrediting transgender people and painting them as violent, abusive, and dangerous.

And some of the posts that have reportedly been removed — due, according to Listen to Lesbians, to mentioning “dyke” — also contain transphobic and/or biphobic statements, raising the possibility that they were banned for other reasons.

TERFs don’t believe that trans women are women. Or that bisexual women can claim the word “dyke.” And most TERFs object to the word TERF, considering it to be a slur, despite ample evidence to the contrary, as the TransAdvocate has reported.

So while it’s possible some posts are getting caught up in an imperfect algorithm, or that some human monitors are acting out of personal bias, it’s also possible these posts are getting flagged for something other than their use of the reclaimed slur.

Hard-line muslims are boycotting Starbucks over support for our rights