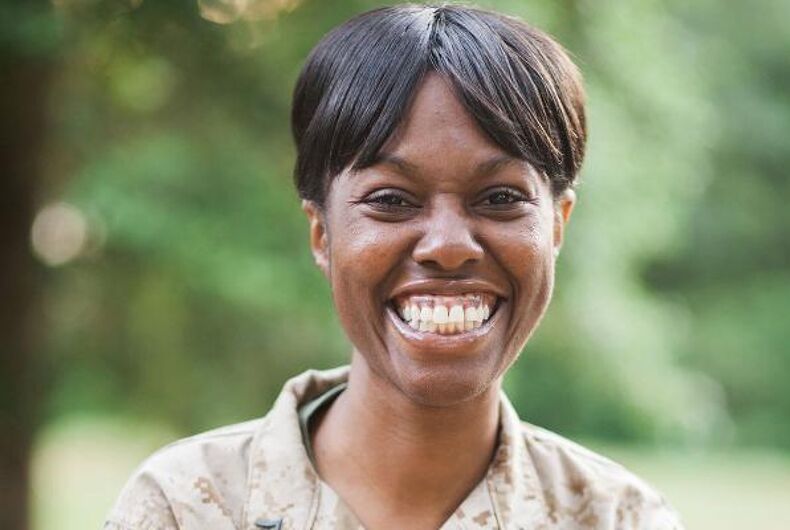 Monifa Sterling argued that being order to remove a Bible verse from her desk was a limit to her free expression of her religious beliefs. Photo: First Liberty Institute

The United States Supreme Court rejected an appeal from a former Marine on Monday in a “religious freedom” case revolving around displaying one’s beliefs in the workplace.

Monifa Sterling ignored her supervisor’s request to stop posting Bible verses on her desk, resulting in disciplinary action. Lower courts ruled that this did not constitute a “substantial burden” on her First Amendment rights. The Supreme Court justices upheld her court-martial without comment, Military.com reports.

Sterling was a lance corporal stationed at Camp Lejeune in North Carolina. She was court-martialed for a number of offenses in addition to display the Bible verses, including disrespecting a superior officer, disobeying lawful orders, and failing to report to an assigned duty.

One such verse was reportedly a personalized version of the biblical phrase from Isiah 54:17: “No weapon formed against thee shall prosper.”

She was reduced in rank and given a bad-conduct discharge. She later left the armed services.

“Because the Supreme Court did not decide to review the case, the travesty below by the Court of Appeals for the Armed Forces will now stand,” said Kelly Shackelford, CEO and chief counsel for First Liberty Institute, which represented Sterling.

The interpretation of “religious freedom” has emerged in recent years as one of the key battlegrounds in the current culture war. It gained widespread notoriety when Vice President Mike Pence issued a religious freedom type law in Indiana, in his role as the state’s governor. He later backpedaled amid a backlash.

There have been concerns that President Donald Trump might issue a religious freedom executive order, with a leaked draft showing it could spell disaster for the LGBTQ community, as well as just about anyone who doesn’t fit the Christian conservative mold.

So far the only order dealing with the issue is one Trump signed going after the Johnson Amendment, prohibiting churches and other nonprofit organizations from endorsing a candidate or political party.

The Family Research Council released a statement condemning the ruling, as well as criticizing the Obama administration:

The Supreme Court’s refusal to hear this case has the unfortunate effect of allowing a chill on religious expression in the military to continue, and only underscores the need for the Trump administration to root out the anti-religious animus allowed to fester in the military during the Obama administration. Defense Secretary Mattis must consider the many complex ramifications of anti-religious Obama-era policies that remain in effect.

The DOD and Congress need to ensure the priorities of the U.S. armed forces remain those that the Secretary has outlined: mission readiness, command proficiency, and combat effectiveness – not squelching religion – which is actually quite necessary to readiness and effectiveness. Holdover personnel from the Obama administration need to focus on these priorities, and not on the last administration’s social engineering projects that ignore military readiness.