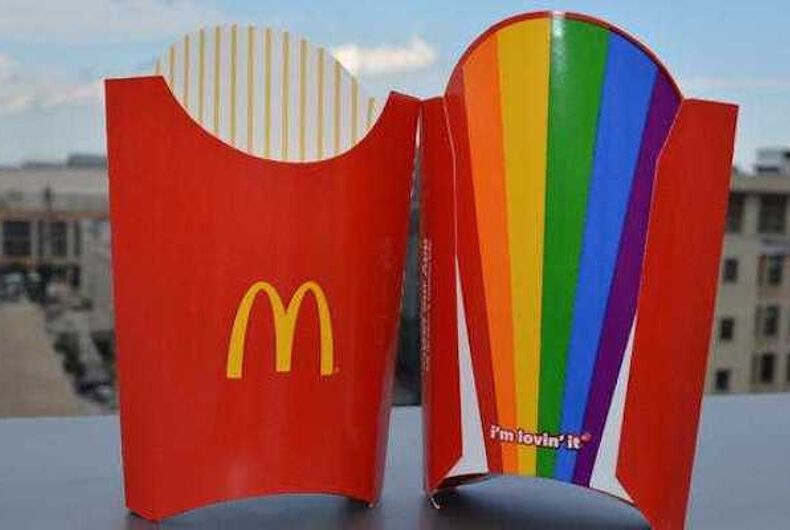 Three McDonald’s locations in Washington DC will change their french fry boxes to rainbow stripes to honor LGBT pride and the usual suspects are outraged. All three stores are located along the city’s pride parade route according to the Washington Blade.

“The rainbow fry boxes are a fun way to show our support of the LGBTQ community using one of McDonald’s most iconic and recognizable items; however, these fry boxes are ‘small potatoes’ in the grand scheme of our commitment to this community,” Cathy Martin, co-chair of the McDonald’s PRIDE Network, said in a statement. “We are proud to honor and celebrate the LGBTQ community, including our employees, customers and beyond, each and every day.”

Joshua Feuerstein, the former televangelist who flipped out over Starbucks plain white holiday cup, is up to his old tricks. Another fast food franchise has gone gay!!

“DISGUSTING! McDonald’s released their RAINBOW FRIES today in honor of GAY PRIDE!” Feuerstein shouted on his Facebook page. “Im tired of corporations trying to influence our families like this. SHARE THIS and let people know to STOP EATING at McDonalds! Plus, their food is crap. Really.”

Maybe this time instead of leading a ridiculous campaign to get a fast food outlet to recognize one group of people’s holiday, he should be on our side in The War On Pride. Then again, well, he’s stupid so logic isn’t his strongest ability. After all, if a coffee cup can ruin your holidays, I’ll bet a french fry box can completely destroy a religion.