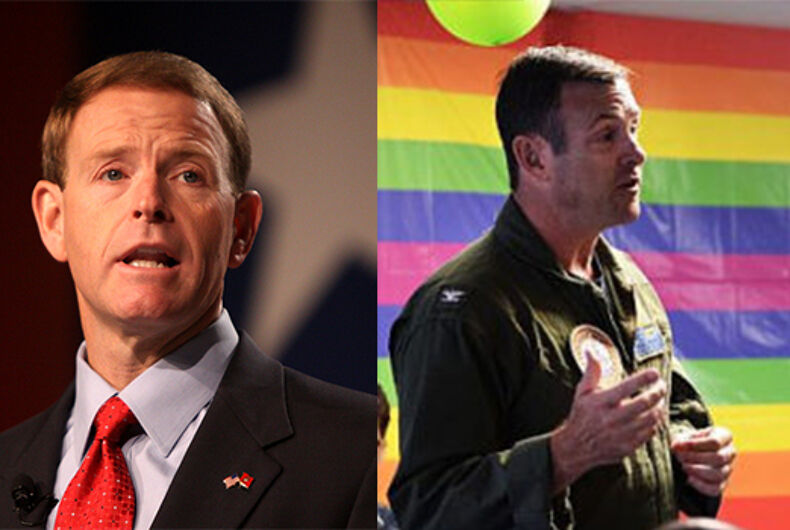 Tony Perkins, head of the Family Research Council, is crying foul over the fact that some government agencies have decided to honor the LGBTQ community, even though President Donald Trump notably failed to give a Pride month proclamation.

As we previously reported, the Department of Defense and State Department both issued official statements honoring Pride month. The Navy also said it “joins the nation in recognizing Lesbian, Gay, Bisexual, and Transgender (LGBT) Pride Month throughout June,” in a press release.

Perkins, whose organization has been deemed a hate group by the Southern Poverty Law Center, also signaled his upset that diplomats were flying the rainbow flag, and that the Pentagon held its annual Pride event.

In a tradition most Americans hoped was gone with President Obama, a handful of U.S. diplomats decided to fly the rainbow flag on par with the stars and stripes that millions have died defending.

The jarring sight in Guatemala, Cuba, Macedonia, the Dominican Republican, and other countries was just more evidence of the politically correct mess left behind by the last administration…Out of respect for the voters who rejected that extreme agenda, it’s time for administration officials to step in and put a stop to a display that puts a sexual fringe on the same pole as Old Glory.

And unfortunately, the State Department isn’t the only agency bucking the White House’s values this June. Today, the Pentagon carried on a tradition President Obama began in 2012, holding a special “pride” event at the same time that other military leaders are ready to turn the page on eight years of social engineering. It was a disappointing development for conservatives, who thought they had an ally in new Defense Secretary James Mattis. FRC’s Lt. Gen. Jerry Boykin (U.S. Army-Ret.) was vocal about his displeasure. “I was hoping that the Trump administration would put less emphasis on everything that does not contribute directly to enhanced readiness and war fighting.”

Leaders of the Conservative Action Project echoed General Boykin’s frustrations. In a letter signed by dozens of organizations, the group calls on the White House to intervene. “The Trump administration should discontinue funding and directing personnel resources for special-interest events, including LGBT-Pride Month events in June, which do not strengthen military readiness… We will support officials and initiatives taken to end politically-correct social agendas, and look forward to more changes that will strengthen the armed forces and restore America’s military readiness.” The Obama administration worked from Kenya to El Salvador – not to advance his country’s priorities –but the 44th president’s radical social agenda. It’s time for Donald Trump to take a wrecking ball to the LGBT distractions of his predecessor and turn the page on policies that offend more people than they “honor.”

Now this is how you troll an antigay street preacher