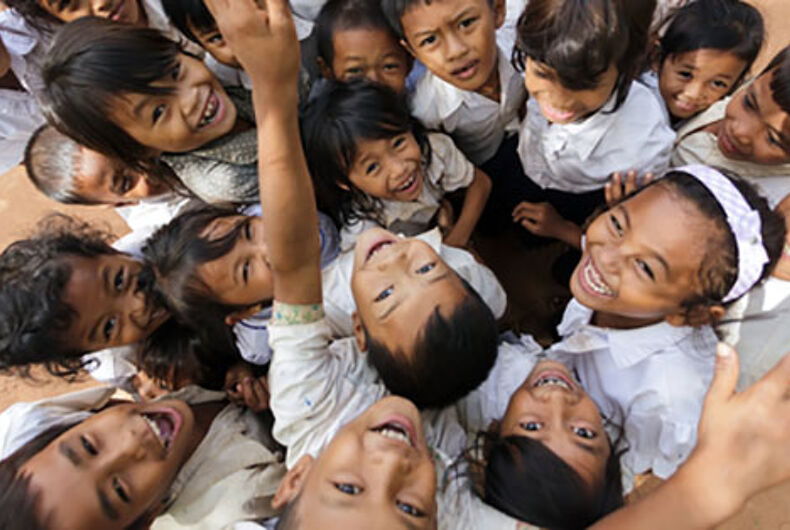 The big news out of Cambodia (and if you don’t know where that is, just scroll down a little and check out the handy map showing it’s between Thailand and Vietnam in Southeast Asia) is that the government there is considering a proposal to introduce lessons on what it means to be LGBTQ.

The courses, which will also include age-appropriate education on sexuality and gender, would be taught starting in first grade, straight through senior year of high school, reported Gay Star News.

The course is to be called Life Skills.

“First, to teach children about the biology of male and female bodies,” said LGBTQ advocate Srun Srorn, who is said to have worked closely with Cambodia’s Ministry of Education on the proposal. “Second, to explain gender identity and how this could differ from the biological sex. Third, to focus on gender-based violence, forced marriage and discrimination based on sexual orientation,’ Srorn told the Phnom Penh Post.

It cannot be stressed too strongly, this is Cambodia — where same-sex marriage is not yet legal and there are no protections at all against discrimination of LGBTQ citizens, but the government has no laws against gay or lesbian sex, changing legal gender markers is allowed (following surgery) and LGBTQ troops are part of its armed forces. They even allow gay men who have sex with men to donate blood.

The kingdom of Cambodia is still a land of political strife, especially given its history of conflicts with the United States, Thailand and Vietnam and its decades of oppression of its people, still recovering from the forced abandonment of its cities under a brutal regime that forced citizens to adopt agricultural careers.

And yet its current government is entertaining the idea that all students in 11th grade be taught the value of access to safe, suitable and effective contraceptives to avoid unwanted pregnancies, and to learn about safe and legal abortions.

The curriculum, reports say, would also include sections on prevention of gender-based violence, and how to prevent HIV infection and other sexually transmitted diseases — which had not been taught in schools there before, according to Dr. Chhay Kim Sitheavy, director of the ministry’s School Health Department.

Sitheavy said Life Skills is aimed at teaching students that homosexuality is normal and that LGBTQ people should not be discriminated against.

“Values have changed over the past years and courses need to be adapted,” she said.

And just for comparison, how does the United States compare? According to the Guttmacher Institute: sex education is not required in all 50 states.