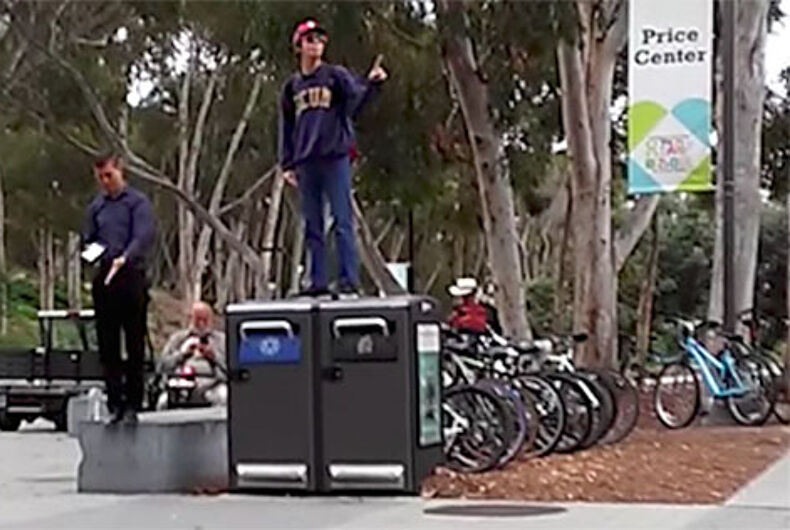 When a Christian preacher showed up earlier this month on the University of California’s San Diego campus, and started to denounce gays and lesbians, Visual Arts major Jerry Ramirez decided on the spur of the moment to take action.

While most passersby simply ignored him, other students told the unknown preacher to fuck off, gave him the finger or yelled “Hail, Satan!” But as San Diego Gay Lesbian News reported, Ramirez calmly passed behind the man, climbed atop two trash cans right next to him and without even removing his backpack, began his own improv interpretation of the homophobic sermon.

Ramirez: “Everyone listen to this guy! He has something very important to say!”

Preacher: “Theater is infested with the gays.”

Preacher: “Just because you major in theater does not mean you’re gay.”

Ramirez: “However if you do major in theater, you might not be gay it’s just a higher possibility!”

Preacher: “If you listen to Elton John all the time, you might get to gay.”

Ramirez: “You can catch gayness from listening to Elton John, please be aware!

And it was all caught on tape by Joris Kanowski, Ramirez’s roommate, assistant and advisor. As you can see in the video, the preacher at first seemed put off by Ramirez’s mocking him, as The Tab reported, but nevertheless persisted in his rant, with his new sidekick translating his message in comedic fashion.

“We indeed wanted to troll the preacher by belittling him,” Kanowski wrote in an email to The Tab, to explain what he and Ramirez were doing.

“Jerry Ramirez is a student of Visual Arts and aspiring actor,” he continued. “It is true that he is from New Zealand. He did some other crazy performances as well, such as eating five bananas with the peel on in 10 minutes… Jerry stood on this dumpster for full 30 minutes, so the 12 minutes are already a compilation.”