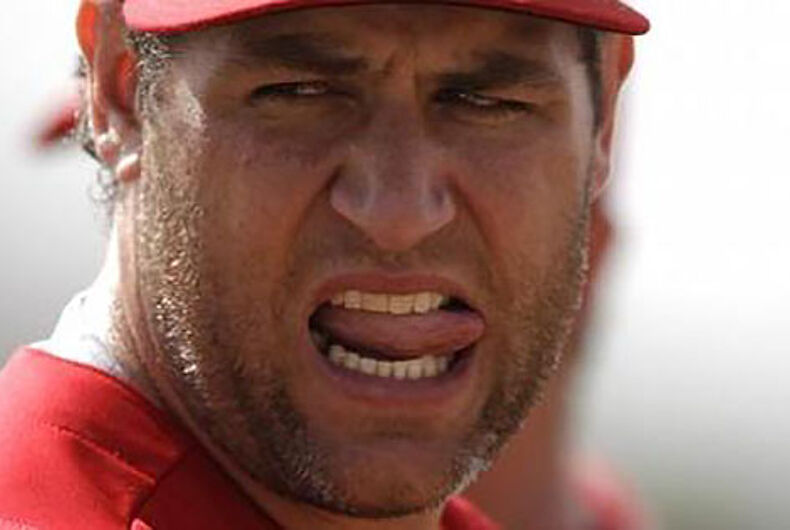 One of Missouri’s two Major League baseball teams is inviting fans to come hear from a retired sports hero who is an outspoken opponent of LGBTQ rights on a Sunday devoted to celebrating Christianity.

The Cardinals organization — which earlier this month dropped hints that it is finally considering joining 11 other teams in hosting a Pride Night at its ballpark in St. Louis — isn’t hiding its admiration for Lance Berkman, the former outfielder and first baseman nicknamed “Big Puma.”

That despite the devout slugger’s anti-LGBTQ activism in Houston, where Berkman was once a star player for the Astros and, as the Houston Chronicle reported, a vocal opponent of that city’s attempt to retain a human rights ordinance protecting the civil rights of its marginalized citizens.

“To me tolerance is the virtue that’s killing this country,” the former All-Star said in a 2015 radio interview just days after HERO was defeated. “We’re tolerant of everything. You know, everything is OK, and as long as you want to do it and as long as it feels good to you then it’s perfectly acceptable for you to do it. Those are the kinds of things that lead you down a slippery slope, and you’ll get in trouble in a hurry.”

Lance Berkman played in St. Louis. Guess his girls didn't go to his games! SL has a non-discrimination ordinance.-A http://t.co/gzEbKIYOd9

Berkman lamented being labeled a bigot by Houston’s mayor and other advocates pushing “the LGBT agenda” for calling transgender women “troubled men.”

“What’s become a shame is that it seems like anybody who has an opinion that comes more from right immediately gets castigated, called a bigot, by voicing that opinion,” Berkman said, but he dismissed “digital persecution” in social media and said he felt it necessary “to stand up for Christ.”

And when challenged by a sports journalist on his comments that being gay or transgender is a behavior or “lifestyle” and told it is in fact a individual’s identity, the former World Series slugger responded:

“You’re taking their word for it, saying that’s the way they’re born… maybe there’s science that backs that up, I don’t know.”

Berkman told NBC’s Craig Calcaterra in 2015 that he regretted the use of the term “troubled men,” and claimed he specifically warned the backers of the anti-HERO campaign that using the term would be controversial. “I probably should’ve taken a stronger stance on that,” Berkman said, but he said campaign organizers made a strong case for its inclusion.

“The issue is, what to do about a 15 or 16-year-old boy who thinks he’s a girl and wants to shower with the girls? Maybe he is [transgender], maybe he’s confused. But I wouldn’t want him in the shower with my daughters. We shouldn’t have the rights of 2 percent of the population trump the rights of the other 98 percent. Is it a mental choice? I don’t know. But it’s a Pandora’s Box.”

Christian Day is not a new thing for the Cardinals; fans are encouraged to bring canned goods to the stadium to donate for military families.

Missouri’s other pro baseball team, the Kansas City Royals, is hosting its first Pride Night next month, and unnamed officials in the St. Louis Cardinals organization reportedly plan to add one to its calendar this or next year, in hopes of changing the public perception of its ballclub as homophobic.

A gay minor league pitcher alerted Major League Baseball last year that he retired from the game because of hostile and homophobic attitudes he experienced in the clubhouse.

But another move to appeal to LGBTQ fans could be less altruistic and more about cashing-in: this season, St. Louis joined other MLB teams in offering fans Pride merchandise on its online store, such as tee shirts with rainbow-colored logos. The team calls it “The Pride Collection.”

Is Pulse shooter Omar Mateen’s widow his victim or his accomplice?