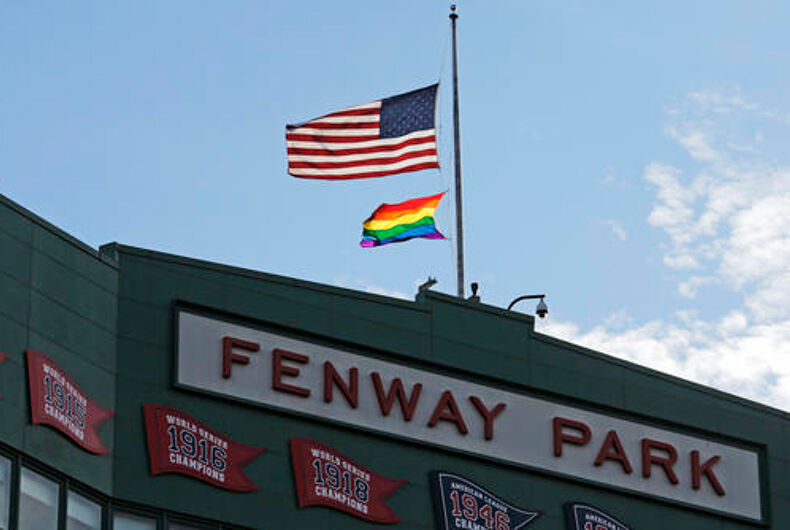 The American and gay pride flags fly at half-staff, in honor to the victims in the Orlando night club shooting, prior to the first inning of a baseball game between the Baltimore Orioles and Boston Red Sox at Fenway Park, Tuesday, June 14, 2016, in Boston. Photo: AP Photo/Charles Krupa

More Major League Baseball teams will host LGBTQ nights for Pride month, this June, than ever before: a third of the league, 11 teams in all. And half of all the teams have plans for some kind of event during the season.

Outsports notes that MLB Pride Nights have been taking place for more than two decades, often drawing huge crowds, and compiled a list highlighting some of the exciting events scheduled throughout June:

The Detroit Tigers will hold their third annual Pride Night, raising funds for the Detroit Regional LGBT Chamber. The deadline to buy tickets is May 19, so don’t delay if you plan on going to this game against the Los Angeles Angels.

The Oakland Athletics will also host Pride Night on Tuesday, June 6, as they take on the Toronto Blue Jays. Those who purchase a special ticket will receive an A’s Pride scarf, and admittance to a pregame party in the Eastside Club. Parking will also be free.

The New Hampshire Gay Men’s Chorus will sing the National Anthem at Fenway Park as the Red Sox take on the Detroit Tigers. Proceeds will go to Boston Pride programming. There will also be a pregame Pride Party on the right field roof deck.

The Los Angeles Dodgers will host the Cincinnati Reds, and attendees will receive a Dodgers Pride t-shirt. There will also be fireworks after the game.

The Tampa Bay Rays will host the Oakland A’s for their Pride Night. Attendees will receive a specially priced ticket for seats in the Lower Box and a Rays Pride tumbler.

The Washington Nationals take the field against the visiting Atlanta Braves with proceeds going to Team DC’s Student-Athlete Scholarships.

The Colorado Rockies, playing the San Francisco Giants, will host their first LGBT Night in more than a decade, with Outsports and One Colorado hosting.

The New York Mets take on division rivals the Washington Nationals, with proceeds from discounted tickets going to the nonprofit LGBT Network, and its Safe Schools initiative to stop bullying in Queens and on Long Island.

The Seattle Mariners take on the Tigers, with a pregame event in the Outside Corner near Section 330. Attendees will also receive a Pride Night hat.

The Atlanta Braves will play the Milwaukee Brewers for LGBT Night, featuring a pregame party and postgame fireworks. A portion of proceeds will go to Lost-n-Found Youth, an organization working with LGBT homeless youth.

The San Francisco Giants host the Rockies, and attendees who purchase a special event ticket will receive a SF Pride scarf, with partial proceeds going to local LGBTQ non-profits.

Other LGBTQ community events hosted outside of the month of June include those by the following teams: Chicago Cubs, Miami Marlins, Philadelphia Phillies, Pittsburgh Pirates, and San Diego Padres.

This drunken lawbreaker is not Hillary Clinton