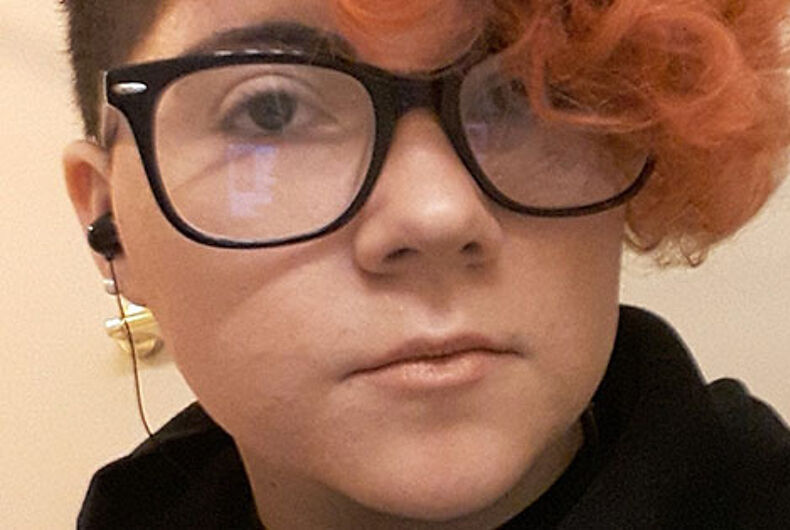 Jay Griffin’s parents said his family, his closest friends, even his church accepted him, but the transgender boy took his life after school let out for the summer. And their focus since that dark day last month has not been examining why, but how they can honor the memory of this 13-year-old budding advocate.

“I have peace because I don’t even ask why,” his mother Erin Georgia told Al.com. “If you do research on suicide, if you’ve had friends who have committed suicide, it’s not about why. The instinct we have to self-preserve is so strong that people will kill each other to survive. But to override that natural instinct, there is an imbalance, a despair, a depression, a slew of things that go into it. There’s not ever just one reason,” she said.

It’s not because Jay didn’t turn in his homework. It’s not that Jay got bullied. It’s not that Jay was transgender. It’s not just one thing, so asking why for suicide is an unending question that I think we torment ourselves with. I hate to resolve death down to why.

Although she doesn’t believe it was to blame, her son was bullied, Georgia said. “There was bullying because there is always bullying.”

“It’s probably been the roughest since the elections, because hate crimes have increased by 20 percent since the election and people feel more validated to be more discriminatory,” said Georgia. “It wasn’t from any particular student. It would be somebody in the hall saying, ‘trans.’ Those were very difficult times, but the teachers were very supportive.”

Griffin had just finished 7th grade at Hewitt-Trussville Middle School in Birmingham, Alabama, the heart of the Bible belt. Although he came out in 6th grade, the administration would not allow him to use the boy’s rest rooms or locker rooms. Instead his only choice was to use either the girls’ or the faculty bathroom. However, that faculty bathroom was so far away from his classes that he often he couldn’t, or wouldn’t, visit the rest room throughout the entire school day.

His mother said that last week in May, like most weeks, had ups and downs: Griffin had a really great day followed by a really bad day — the last day.

It was the end of the school year, and he had stuff to turn in. It was just stress and the worst day. He was down and he was upset.

His parents and family spent time with him, shared one last dinner together. “We checked on him multiple times. I did not specifically ask him if he wanted to hurt himself. It was completely unexpected,” Georgia said. “He had cut before, but he always immediately came to us and told us what he did. I would just hold him and talk to him.”

Early the next morning his parents found him dead in his bedroom.

The clarinet player loved science and fossils and geology, and described himself on Facebook as “just a dorky, salty but sweet teen Trans boy who likes to draw and stay up late.”

Griffin suffered from anxiety and depression. He was in therapy and on medication. His mom said he was accepted in their church but “He didn’t feel validated or accepted in our community.”

You really need a safe space of allies and advocates and people that are like you. That’s where they hear their true voices. There are no local community safe spaces that I know of, and we’ve looked. That was part of Jay’s struggle.

After someone stole this Trump supporter’s hateful signs, he did something worse