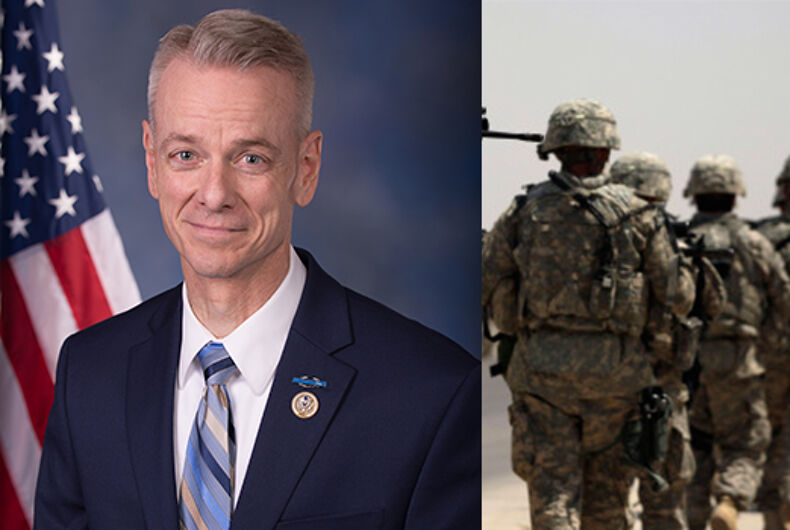 Republican Rep. Steve Russell of Oklahoma thinks that since the Pentagon has dropped the ban on transgender people serving openly in the armed services, soldiers might pretend they are trans in order to avoid deployment.

If you are confused by that argument, it is because it is stunningly stupid. In fact, it is precisely backward.

If trans people aren’t allowed in the military, all one would have to say is, “I’m trans” in order to get the boot. Now, provided the Trump administration allows the Obama-era guidelines opening the door to trans soldiers to stand, with an implementation date of July 1, simply saying you are transgender won’t get you out of your responsibilities.

Just like you can no longer claim to be gay in order to get out, as there is no longer a ban on gay soldiers.

So what, then, is the congressman using as the basis of his argument?

That one could claim to be experiencing gender dysphoria, the stress caused by experiencing your gender differently from the one assigned at birth, in order to avoid deployment.

Trans men and women wishing to join the military are required to wait 18 months after transitioning before they can be accepted, whereas those already serving are allowed to begin doing so openly.

“As you go through this proposed policy, it says that commanders are given authority to make determinations on whether or not a soldier would be deployable based upon where they’re at in this supposed chain of transitioning,” Russell said in a recent interview with Family Research Council’s Tony Perkins.

“Okay, so here’s another vignette. I decide that I don’t want to deploy to combat. I state that I’m suffering from gender dysphoria, which there is no criteria for commanders to even know what this means,” he continued. “And then I’m in a trick bag where I have to make some sort of determination based upon some social, ideological agenda that the vast majority of the military is not focused on…and now you’ve got a construct where soldiers who don’t want to deploy can throw this monkey wrench into the machinery, and you’re underwriting it with your tax dollars.”

The policy does not mention the words “gender dysphoria once,” instead speaking of “medical treatment associated with gender transition.” While one might argue that psychological treatment can be included under this definition, it is clear that the policy is written considering the needs of soldier going through legitimate transitions.

You can listen to Russell’s remarks, via Right Wing Watch, below.

If Jews can be expelled from Chicago’s Dyke March, who’s next?