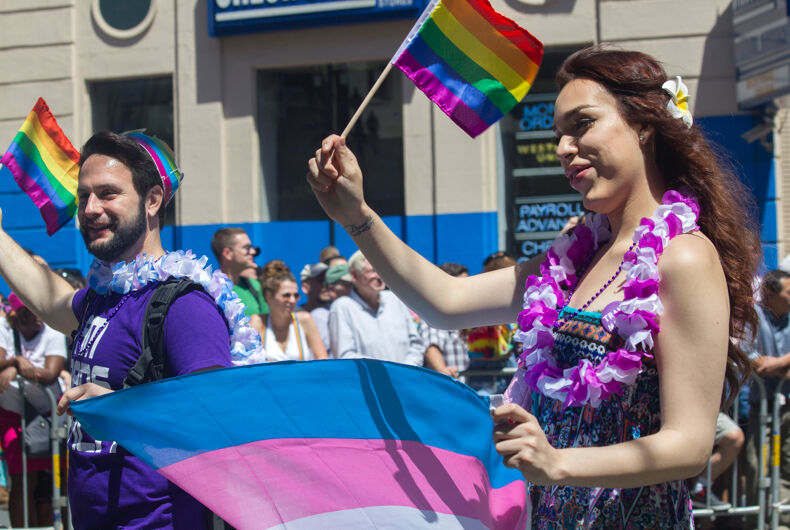 Trans women of color Marsha P. Johnson and Sylvia Rivera were on the front lines of the Stonewall Riots. But nearly 50 years later, the LGBTQ pride events that grew out of those early acts of public resistance still don’t always feel inclusive of transgender people.

We asked LGBTQ Nation readers, “How inclusive do you think Pride is of trans people?” The overwhelming majority of respondents said, in short, “not very.” As we learned last week, transgender folks aren’t the only ones who don’t always feel welcomed at pride. Bisexual folks and queer women also said they feel left out.

“As a trans woman, this is the honest to God’s truth when I make this statement. I get more love and support from the “straight” Community than I ever have gotten from the LGB community,” Valencia Rose Dumas  said. “I haven’t been to any event with LGB in years. Gay men don’t want us around because we are not men. And lesbians don’t want us around because they don’t consider us women. And the rest treat us like a fetish or see us as drag queens. I have even seen campaigning in an attempt to drop the ‘T’ from LGBT. It becomes very sad and very lonely when you feel you don’t belong.”

This exclusion is especially disheartening in light of trans people’s role in the movement for LGBTQ equality.

“I think it’s sad that members of the trans community were a major part of equality marches and protests in the 60s and 70s but are still not getting enough support,” Anthony English wrote.

“It’s a damn shame considering that we owe that Pride to trans women in Stonewall to begin with,” Charlotte Depret said. “People like to forget or intentionally alienate the T and it’s really infuriating.”

And as some pointed out, it’s not just about events being inclusive, it’s about the community.

“I don’t think Pride, nor the community, is inclusive of trans people,” Andrea Bessey  wrote. “Given the history we owe so much to the trans community yet people overlook and discriminate against them. It’s ridiculous.”

But there are some who just don’t see it.

“Are Trans folks stopped at the gate and told not welcome? That would be exclusive. Are they welcomed through the gates like everyone else? That would be inclusive,” Rick Yadon  wrote. “Rent a booth, provide literature, etc if you want to educate people. And what’s with the “safety” issue? You want armed body guards just for you? I’m a human being first, not a gay man. If everyone treated each other with that level of respect and dignity first, we’d all be much better off.”

Others are still baffled by how the T found its way into the LGBTQ acronym.

“Please educate me without judging me. How does trans relate to gay/lesbian/queer?” Jeffrey Deutsch  asked. “To me it’s not a sexual orientation issue.”

“No offense intended, but I truly don’t understand how LGB ever met T???” Nathan Hart wrote.

But others were more antagonistic.

“Trans should have their own community!” Rachael Alvarado said. “Sadly making life harder for other gays/lesbians.”

Because what do we all have in common anyway?

“Those ones and LGB people follow different interests,” Carl Rendon said. “There should not be a ‘community.'”

Gay people benefit directly from trans equality because the vast, vast, vast amount of anti-gay bigotry is essentially gender bigotry. That gay men aren’t ‘real men” and lesbians aren’t ‘real women’ and need to be either brought into line or eliminated from society. As people really get that something as ‘radical’ as living life in ways other than those determined by the gender assigned at birth is valid and normal and to be celebrated, who you hook up with or settle down with will become a non-issue.

Even if we don’t share ALL the same issues that cause our inequality, we all benefit from any change in the majority getting over their issues with any of us. So, if for no other reason, LGBT equality is a real and necessary thing, even if it reflects the needs of people who also have distinct but occasionally overlapping subcommunities or social realities.

Still don’t think you have trans women of color to thank for your pride celebrations? Let Sylvia Rivera remind you.