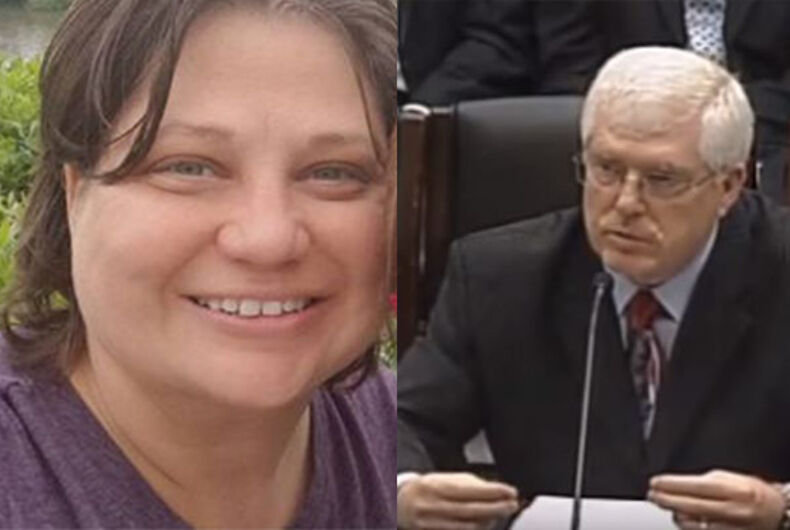 Even though Lora Jane Riedas (l) has been shown to have done no wrong, Mat Staver (r) of the Liberty Counsel continues to go after her.Photo: Valerie Chuchman/YouTube

The anti-LGBTQ religious right organization Liberty Counsel has been campaigning against a lesbian high school math teacher in Florida, accusing her of pushing her views of LGBTQ activism and restricting students who disagree with her.

An investigation showed that there was no validity to the accusations. The teacher, Lora Jane Riedas, was asking students not to wear rosary beads and Make America Great Again hats, but that is because both rosary beads and hats of any kind of prohibited in the school’s dress code.

“I am just relieved, relaxed, for the first time in two weeks,” Riedas said upon learning of the result of the investigation into the complaint.

Yet it hasn’t been enough for the Liberty Counsel. Liberty Counsel is familiar to many for representing Kim Davis, the Kentucky clerk who refused to issue marriage licenses to same-sex couples.

The group’s founder and president, Mat Staver, went after the investigation, and smeared another gay teacher at the school while doing so, using predatory terms to describe the individual.

“The original so-called ‘investigation,’ I put that in quotes, was done by a homosexual who is in the school,” Staver said on a recent episode of Liberty Counsel’s Faith and Freedom radio program, Right Wing Watch reports.

“So it’s like the fox guarding the hen house and giving a report on how’s the hens doing, we know foxes are after them and you have a fox giving a report, ‘Oh, they’re doing fine, don’t worry about them,” he continued.

“Well, we’re not sitting by and allowing that to happen,” he added.

He went on to call it a “whitewash” of an investigation, before vaguely threatening that the group wouldn’t let the situation “go on without some ramifications.”

Liberty Counsel has been named a hate group by the Southern Poverty Law Center for its activism against civil rights.