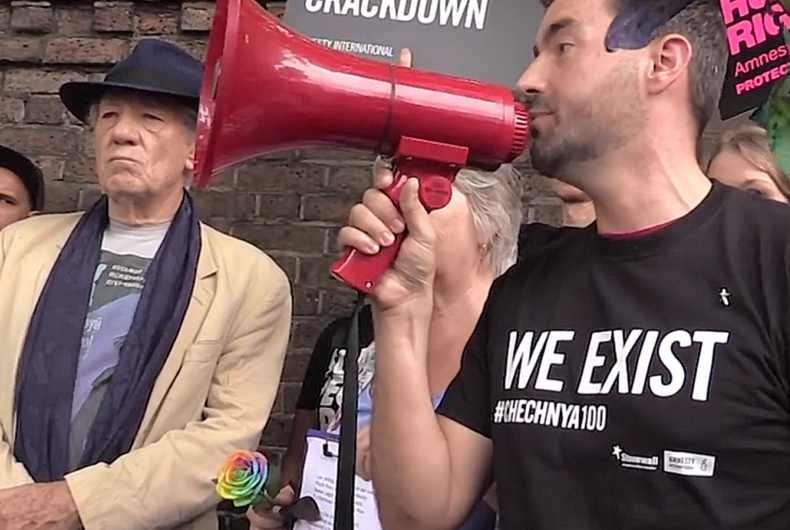 Ian McKellen protested with hundreds of people outside the Russian embassy in London yesterday, calling for an end to the homophobic “purge” in Chechnya.

In April, reports of gay and bisexual men being sent to secret detention sites where they were beaten – sometimes beaten to death – brought international attention to the Muslim-majority Russian federal subject state. Chechnya’s government initially denied that there were gay people in the country, and Russian president Vladimir Putin denied the reports but eventually promised an investigation.

Since the original reports in April, more testimony from Chechens showed that extreme violence against gay people is rampant in Chechnya, leading some to flee to Russia, even though they still worry about being found there.

The protesters in London were calling for more action to be taken to protect gay people’s lives in Chechnya. Many wore black “WE EXIST” T-shirts and waved rainbow flags, and signs had messages like “Love is a human right.”

McKellen stressed that the principle of being able to live freely crosses international borders. “I’m not usually in favor of commenting or interfering on the internal affairs of another country, even when it’s as close to us as Chechnya is, but the point is that this is a matter of principle. Our principles are shared across borders, and the plight of the gay men in Chechnya is the plight of gay men and women throughout Russia.”

He also had a response to Chechnya’s claim that there are no gay men in that country. “What a condemnation it is of Chechnya that its authorities should believe that there are no gay people there, and if there were they shouldn’t be – it’s absolutely appalling. If gay people are invisible it’s because they are frightened to be themselves and come out, so it’s a condemnation not of gay people but the society they are trying to exist in.”

Activist Peter Tatchell was also at the protest, and he told the Evening Standard that the British government has “clearly failed on Chechnya.” He said that the government should have taken the issue to the United Nations Security Council and made it clear that LGBT refugees from Chechnya could go to the United Kingdom.

Fire destroys the Rainbow Lounge in Ft. Worth