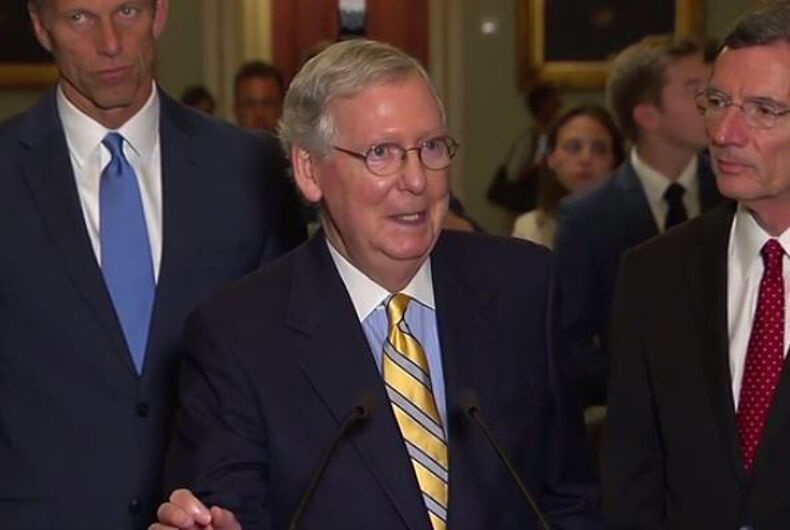 Sen. Mitch McConnell announces the Republicans won't push for a vote on the health care plan this week.Photo: Video screenshot

The Republicans got some bad news after the Congressional Budget Office (CBO) announced that the Senate health care plan they were proposing would result in 22 million Americans getting kicked off insurance rolls.

Turns out, that’s a bitter pill to force your constituents to swallow, and so support seems to be flagging, forcing Senate Republican leaders to delay the vote until after the July 4 recess. Mitch McConnell originally said he hoped the vote could come before the recess.

McConnell announced the move today to reports, saying it was “a complicated subject” that would take time on which to reach a consensus, and get the needed votes.

Meanwhile, President Donald Trump has invited all Republican Senators to the White House this afternoon.

“For LGBTQ people, many of whom already face incredible health disparities, this proposal is downright dangerous,” Human Rights Campaign president Chad Griffin said in a call with reporters. “Both the House and Senate versions of the bill gut core provisions of the ACA, and cut off tens of millions of Americans from lifesaving health care coverage while increasing out-of-pocket cost.”

“Because of the ACA, thousands of low income people living with HIV have been able to obtain health insurance through Medicaid expansion,” he added. “This critical coverage insures that people living with HIV have access to lifesaving treatments. But as part of their despicable proposal, Trump, Pence, and their allies are seeking drastic changes to Medicaid that will strip many of these very people of the essential health care coverage they need, rely, and depend upon.”

Mara Keisling, executive director of the National Center for Transgender Equality, on the same call noted that transgender individuals would be hit hard by this bill as well.

“Our organization has conducted the largest survey of transgender people, the United States Trans Survey…(and) in it we saw very clearly how transgender people are already marginalized in health care,” Keisling said.

“33 percent of the transgender people in our sample said they did not seek health care in the last year when they needed it because they couldn’t afford it,” Keisling said, noting there is reason for the trans community, then, to be concerned about the cuts to Medicaid.

Also of concern is the proposed defunding of Planned Parenthood.