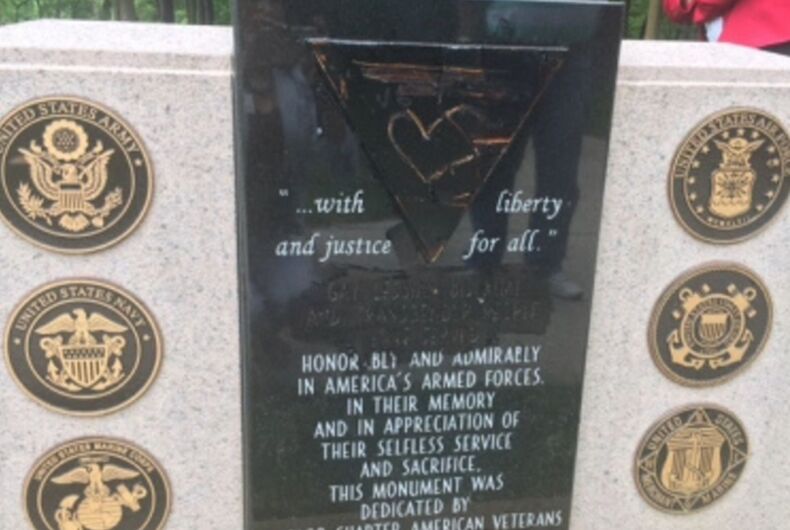 A newly dedicated monument to LGBT veterans was defaced by someone who poured tar all over it.Photo: Abraham Lincoln National Cemetery

Someone poured a tar-like substance over a newly-dedicated monument to LGBT soldiers and while any perceived slight to military veterans normally draws immediate condemnation from mainstream veterans’ groups, only the American Legion is willing to raise their voice to condemn the vandalism.

The monument at Abraham Lincoln National Cemetery was unveiled on Memorial Day by the American Veterans for Equal Rights (AVER) to highlight the sacrifices of troops who often served in silence. Now, the silence from their brothers and sisters is deafening.

“The American Legion would hope that all veterans be treated with dignity and respect – especially the memories of those who have passed away,” Joe Plenzler, Director of Media Relations for the American Legion told LGBTQ Nation. “We value the many sacrifices and selfless service of all who have worn our Nation’s uniform in the defense of our Constitution and the American people.”

Sean Baumgartner, director of the national cemetery, told the Chicago Tribune that cleaning crews have already begun to repair the monument, but that the memorial has been discolored and will need to have some lettering replaced. Baumgartner estimates repairs will cost between $100-$500 and will be paid by the cemetery.

“To purposely have that in your mind to do is just horrible,” Baumgartner told the newspaper. “The circumstances, it looked like a deliberate thing, obviously.”

The monument features an upside down pink triangle and the symbols of all six branches of the military. The inscription reads, “Gay, lesbian, bisexual and transgender people have served honorably and admirably in America’s armed forces.”

Local police have no idea who is responsible, but if found they could face federal charges of defacing public property. The American Legion hopes “police are able to apprehend the perpetrators of this crime.”

No other veterans groups contacted for a statement on the crime responded to inquiries. None of them shared information about the vandalism on their social media channels either. It’s almost as if LGBT service members are still supposed to be silent and unseen despite the repeal of Don’t Ask Don’t Tell. Their silence is even more shocking than the crime itself.