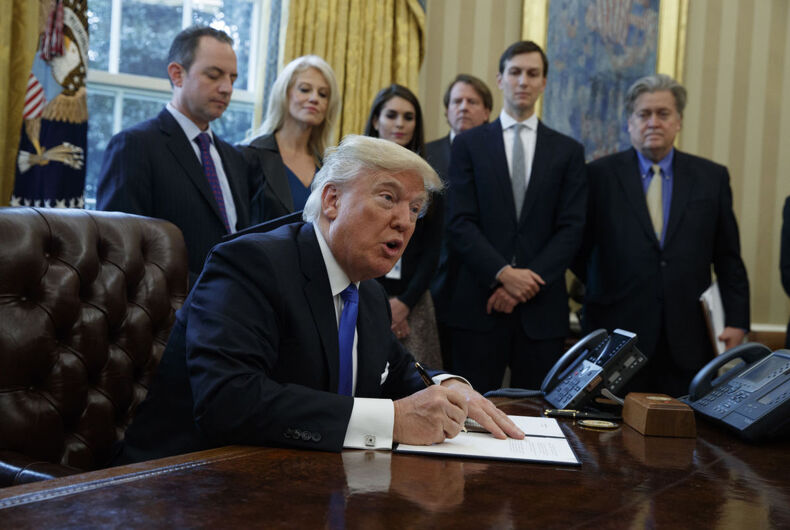 The "religious freedom" executive order is no longer expected to allow for discrimination against the LGBTQ community. Photo: Evan Vucci/Associated Press

Despite reports that Donald Trump’s anticipated executive order would include language legalizing discrimination against LGBTQ people, it appears that today’s order will address religious objections less broadly. White House officials are saying that the religious freedom order will instead focus on making it easier for churches to speak out on political issues and for companies to deny contraceptive coverage to employees.

The White House issued two bullet points in advance of releasing details of the order:

“During the last 8 years, Americans have been under attack from the federal government for following the tenets of their faith.”

And officials followed that by writing the order “Puts an end to the federal government punishing Americans for standing up for their moral beliefs.”

Earlier this week, two senior administration officials confirmed to Politico that the executive order would mirror draft language circulated earlier this year that included broad protections for religious objectors. That language would have allowed federally-funded entities to discrimination against LGBTQ people in virtually every facet of life, so long as it was rooted in sincerely-held religious beliefs.

The Trump administration said in January that such an order “isn’t the plan at this time,” but stopped short of saying it would never happen. Today, it appears to be kicking that can further down the road.

The actual impact of the executive order remains to be seen. While the order reportedly directs the IRS to “exercise maximum discretion to alleviate the burden of the Johnson Amendment,” the prohibition on politicking from the pulpit requires an act of Congress to revoke. And the “regulatory relief” it purports to extend to employers who have religious objections to contraception is unclear.

What is clear is that the order, at least on its surface, helps Trump check off boxes that make his supporters on the religious right happy — it reaffirms his commitment to “protect and vigorously promote religious liberty” as well as campaign promises to address the Johnson Amendment. It also coincides with the National Day of Prayer, during which Trump plans to meet with religious leaders.

Trump also stressed the need for “religious freedom” during his speech at the National Prayer Breakfast in February.

EDITOR’S NOTE: This article was updated with new information after it was first published.