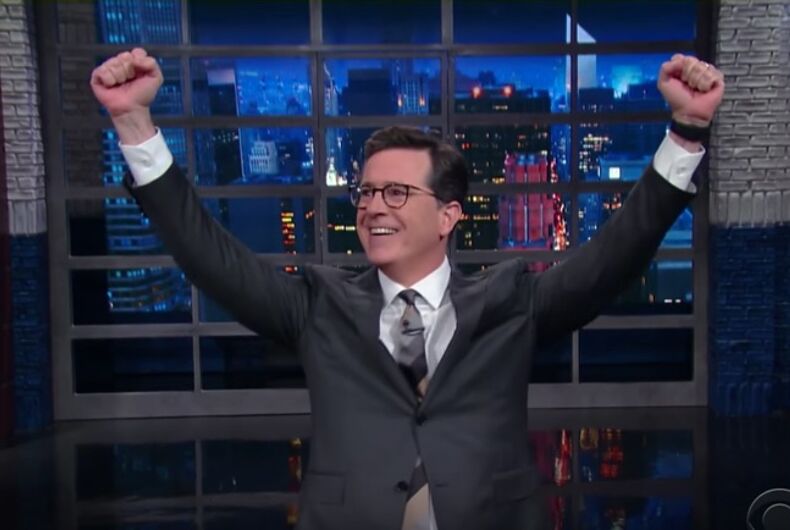 Stephen Colbert opens the Late Show on May 3, 2017.Photo: Screenshot

It took late night host Stephen Colbert two days to respond to backlash and calls to #FireColbert over a crude joke in his Monday night monologue that some are calling homophobic. In this day and age, that’s a long time. But when he did respond, it wasn’t to apologize.

Colbert defended making a joke in which he referred to Donald Trump having oral sex with Russian President Vladimir Putin.

“Mr. Trump, your presidency, I love your presidency; I call it ‘Disgrace the Nation,’” Colbert joked. “The only thing your mouth is good for is being Vladimir Putin’s cock holster.”

The bit elicited strong reactions from both conservatives — who found it vulgar and unpatriotic — and some members of the LGBTQ community — who called it homophobic. Colbert previously created a meme set to RuPaul’s “Supermodel,” that shows a cartoon Putin dancing in make-up and riding a unicorn.

Homophobia for the right cause, with the right targets, is good homophobia, apparently. https://t.co/4rLd1wfTfA

But he didn’t apologize.

“Now, folks, if you saw my monologue Monday, you know that I was a little upset with Donald Trump for insulting a friend of mine. So, at the end of that monologue, I had a few choice insults for the president in return. I don’t regret that,” he said last night. “I believe he can take care of himself. I have jokes; he has the launch codes. So, it’s a fair fight.”

He did, however, give a nod to those who saw the joke as a dig on gays.

“While I would do it again, I would change a few words that were cruder than they needed to be,” Colbert said. “I’m not going to repeat the phrase. But I just want to say, for the record, life is short, and anyone who expresses their love in their own way, is to me an American hero. I think we can all agree on that.”

Watch his response below.