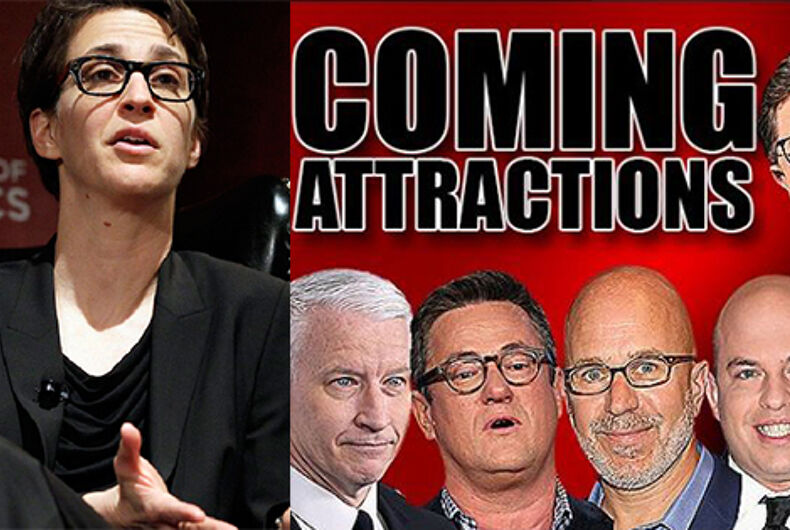 Sean Hannity is trying to stay on the air amid a campaign to get advertisers to remove their commercials from his program, due to his obsession with a debunked conspiracy theory concerning the death of Democratic National Committee staffer Seth Rich. In fact, the story was so flagrantly bogus that Fox was forced to print a retraction.

Some advertisers have begun to heed the call to abandon Hannity’s program, including Cars.com, Crowne Plaza Hotels, and a number of online retailers such as Casper. However, unlike with Bill O’Reilly’s show, the larger advertisers are thus far remaining.

Conservatives, still smarting over the O’Reilly firing and watching Hannity begin to teeter, are striking back, asking advertisers to boycott the shows of who they see as the leading liberal voices on television.

Rachel Maddow is most prominently in the sights of right wing media, but also under the gun are Anderson Cooper, Don Lemon, Al Sharpton, Chris Matthews, Chris Hayes, Lawrence O’Donnell, and Joy-Ann Reid.

Media Research President Brent Bozell, who publishes the conservative websites CNS News and NewsBusters published a statement today announcing a “campaign” that “will focus on informing the American public and corporate advertisers about leftist shows and on-air personalities who use their programs to spread vicious lies and hate.”

See my statement on a new campaign informing the public & corporate advertisers about leftist shows/on-air personalities who promote lies. pic.twitter.com/DgLcAIUo9q

The statement warns of a plan to monitor and report back on anything said on these programs that could be seen as unsavory. “an army of activists” to contact these advertisers by phone and through social media to ask them why they are advertising on programs that are so biased, repulsive and morally bankrupt.”

We are putting the radical left on notice that we are on to them. We know the inside-outside game that radical organizations are playing with their leftist allies in the “news” media. The radical left’s effort to silence conservative media  by targeting their advertisers with coordinated smear campaigns has gone unanswered, but today is the day the conservative movement fights back, but with a big difference: We’ll tell the truth. And we’ll take no prisoners.

Every network and cable news channel is today on notice that the MRC will be closely monitoring their leftist opinion programs and informing their advertisers and the American public when these programs and hosts go beyond political commentary and engage in smear, hate and political extremism. The difference between our effort and what the left is engaged in is that we will demonstrate to the advertisers of these programs how the hosts of these shows are not simply engaged in disagreeable political discussion but rather outright hate and personal character assassination.

It further threatens to mobilize “an army of activists to contact these advertisers by phone and through social media to ask them why they are advertising on programs that are so biased, repulsive and morally bankrupt.”

Website Media Equalizer has also gotten in on the act, with what they’re calling a “Media Equality Project,” started by Brian Maloney and Melanie Morgan, to target progressive voices, using the hashtag #StopTheScalpings.

Hannity has begun tweeting about the boycott, seemingly giving it his approval. He retweeted the tweet above, warning of future boycott targets, as well as reports on it from the Washington Times and the Washington Examiner.

This apple farmer will be the next ‘religious freedom’ posterboy