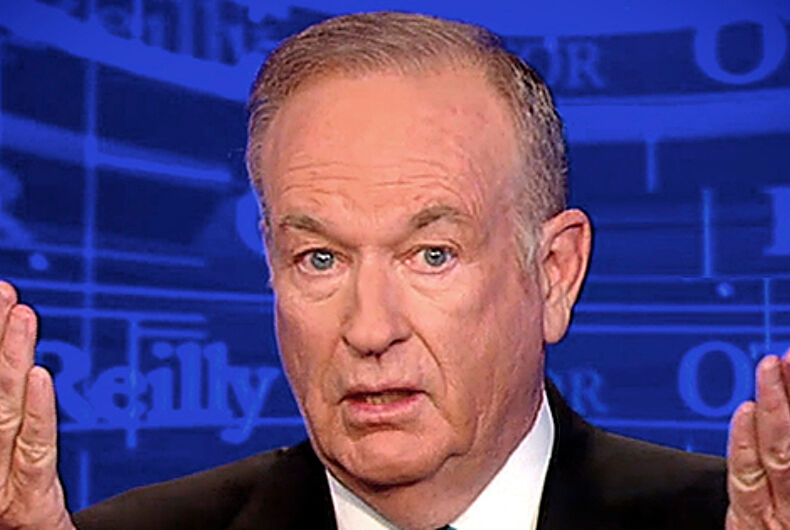 Fox News fired Bill O’Reilly Wednesday, while he was on a scheduled vacation, reports The New York Times.

Earlier this month, major sponsors pulled their ads from the network’s number one show, “The O’Reilly Factor” after widespread allegations of sexual harassment, which had also dogged former Fox News head Roger Ailes. O’Reilly has denied the allegations but reportedly he or Fox paid about $13 million to settle at least five of those cases. An internal investigation was launched which led to O’Reilly’s dismissal.

The newspaper reported that while executives considered how they would end the long career of the 67-year-old ardent Catholic and anti-LGBTQ loudmouth, O’Reilly met with Pope Francis at the Vatican today. He reportedly shook hands briefly with the leader of the Roman Catholic Church — who the paper noted he publicly lectured on the issue of immigration.

To mark the occasion of his imminent departure, GLAAD tweeted some of the tall tales the 6’4″ homophobe and transphobe has told over the years. And others joined in.

.@oreillyfactor called trans rights INSANE and INAPPROPRIATE. No Bill, but your "alleged" treatment of women is https://t.co/lVgPIJ2GwX

Let's not forget when @oreillyfactor said, "I don’t buy… that homosexuals have a constitutional right to marry." https://t.co/VRI0S9aCmV

Oh and there was also that time @oreillyfactor compared gay people to al Qaeda: https://t.co/PVoaMZ7jch

And then there was this:

University of Iowa’s athletic program is on trial for discrimination

Is Pat McCrory about to face a federal voter fraud investigation?