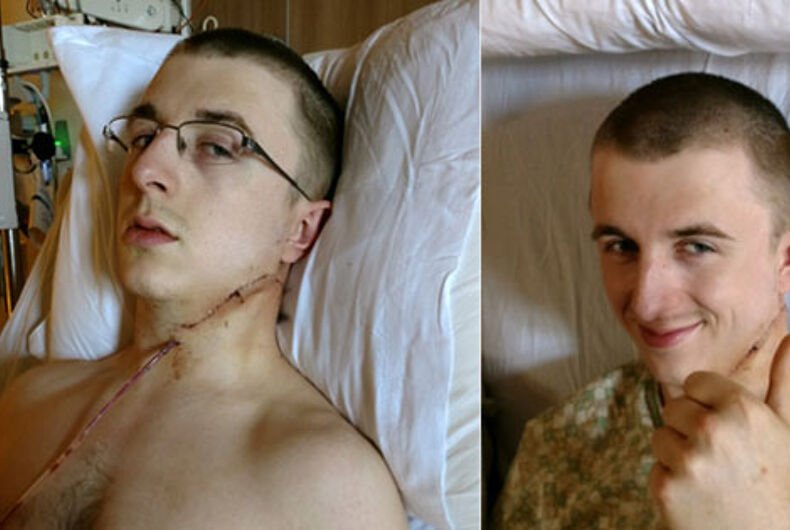 Micah David-Cole Fletcher, 21, is back at home in Portland, Oregon for the first time since being attacked by a raving, ranting racist with a knife that he and two other Good Samaritans tried to stop.

This comes as Fletcher and the world got to see and hear the suspect — whose outspoken support for the white supremacist cause and hatred for Muslims — sparked Friday’s deadly confrontation. Among his statements: “I hope everyone I stabbed died.”

Fletcher sat in the front row of the courtroom, facing Jeremy Joseph Christian, 35, who shouted as he made his first appearance in court Tuesday. He’s charged with killing Taliesin Myrddin Namkai Meche, 23, and Ricky John Best, 53. They and Fletcher intervened after he allegedly harassed a 16-year-old girl and her Muslim friend on a Portland light rail train.

From the moment Christian entered the courtroom, he spewed venom, although at no one in particular.

“Get out if you don’t like free speech,” he said, and, “You call it terrorism, I call it patriotism. You hear me? Die.”

This bold boast, and affidavits detailing his hate-filled his rant on the train, came on the heels of a startling report by CNN. After Christian was arrested Friday, the network reported he sat in the back of a police car and said: “I stabbed the two motherfuckers in the neck and I’m happy now.”

The statements by Christian were obtained by recording devices inside the Portland police cruiser.

Get stabbed in your neck if you hate free speech.

I’m tearing out motherfucker’s throats, you think I give a fuck who I spit on?

I can die in prison a happy man.

Think I stab motherfuckers in the neck for fun? Oh yeah, you’re right I do. I’m a patriot.

I told him, you ain’t gonna heal punk. And he still wants to put hands on me. Die bitch. Fucking die…. That’s what liberalism gets you.

I hope they all die. I’m gonna say that on the stand. I’m a patriot, and I hope everyone I stabbed died.

It was close for Fletcher, who according to his girlfriend suffered a slash across his neck a mere milimeter from his jugular vein. He underwent two hours of surgery to remove bone fragments from his throat, and was released from the hospital Tuesday. He is a student at Portland State University, and an accomplished poet. Fletcher even composed a poem about the attack while recuperating in the hospital.