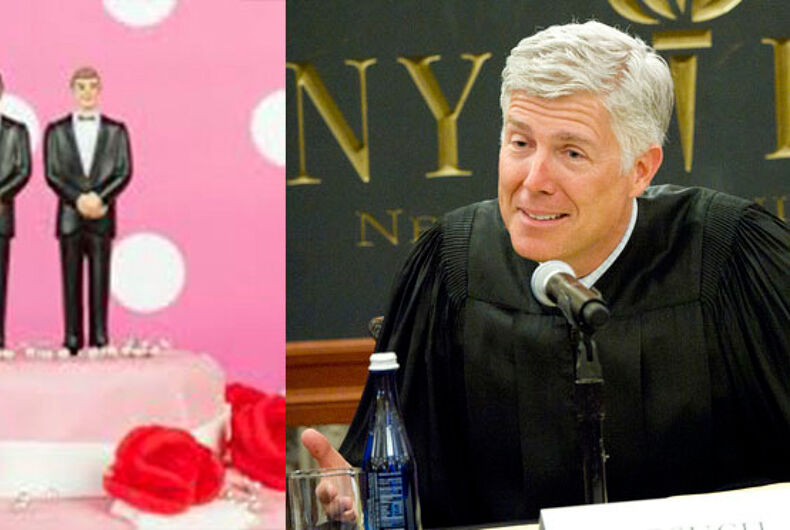 It’s been more than a year since the Colorado Supreme Court refused to hear the religious liberty case of Masterpiece Cakeshop vs. the Colorado Civil Rights Commission, and it’s not clear how much longer it will be before it reaches the highest court in the land.

The case pits a baker’s freedom to be a homophobe against the rights of a gay couple who only sought a product that is purchased by nearly every other heterosexual couple in America.

Charlie Craig and David Mullins were refused service by baker Jack Phillips in 2012, when Phillips declined to make them a wedding cake to celebrate their Massachusetts nuptials in Colorado. The couple filed a complaint with the Colorado Civil Rights Commission, which ruled in December 2013 that Phillips discriminated against them and ordered him to change his store policy against making cakes for gay weddings or face fines. The Colorado Court of Appeals also ruled against him.

Phillips hasn’t commented on the case in the past year. He previously said he has no problem serving gay people at his store, but that making a wedding cake for a same-sex wedding would violate his Christian beliefs.

And that’s why experts agree this closely-watched legal standoff has the potential to become a landmark ruling.

Plus it’s a case from the home state of the newly-minted Justice Neil Gorsuch, one that pundits and journalists alike see as “custom-made” for the conservative jurist who decided the Hobby Lobby case. And given the 5-to-4 majority of conservative justices, it could be the most significant case for the right-wing since Obergefell vs. Hodges legalized marriage equality.

But as U.S. News & World Report reported, the Masterpiece case has already been delayed seven times by the high court. And although it is now set to be discussed late next week, there remain many questions about why the Supremes have not yet considered ruling on this hotly debated issue.

Columnist Anne Rostow wrote Thursday in the San Francisco Bay Times: “April 21 was the first petition review conference for Justice Gorsuch, so I sort of expected Masterpiece to show up on next year’s docket. Instead, it was again delayed until the next conference, scheduled April 28. Hmmm.”

But nothing happened, which makes Rostow wonder why the court hasn’t made its move in what she calls the “critical” issue of the free exercise of religion and equal protection under law.

“Keep in mind, the case has not been rejected. Indeed, it’s been in the hopper longer than any other petition under discussion and is now scheduled for the May 11 conference,” she wrote. “Further, a few months back, the justices requested the lower court record on this matter, suggesting that the Court had more than a passing interest in this question.”

“This would be a classic case as a holdover,” said George Washington University professor Jonathan Turley to U.S. News. “The court itself is sharply divided in this area,” and it’s possible the justices are holding off to get Gorsuch up to speed before considering what he called a potentially “transformative” issue.

Turley agreed this case “happens to be a case that falls squarely within Justice Gorsuch’s wheelhouse. This case is virtually made for Gorsuch: He’s written extensively on the types of issues that would determine the outcome. Of all of the cases on the docket, this one speaks most clearly” to his jurisprudence, Turley told the website.

Gorsuch has never weighed or ruled on a case that explicitly dealt with LGB rights, and in the days before he was confirmed his surrogates trotted out several of the justice’s gay friends, to give high-profile media interviews vouching for his equanimity. They told reporters Gorsuch was personally supportive and encouraging of same-sex relationships.

Given that Gorsuch “has written on the interplay of the law and morality,” said GWU’s Turley, it’s possible the justice himself is putting this off, as he is loath to avoid cases requiring “morals legislation or [values-based] decision-making.”

“He would not simply be a likely vote on the side of free exercise” of religion, said Turley. “He would bring a not-inconsiderable amount of intellectual vigor to the case.”

If it ever gets heard, that is.