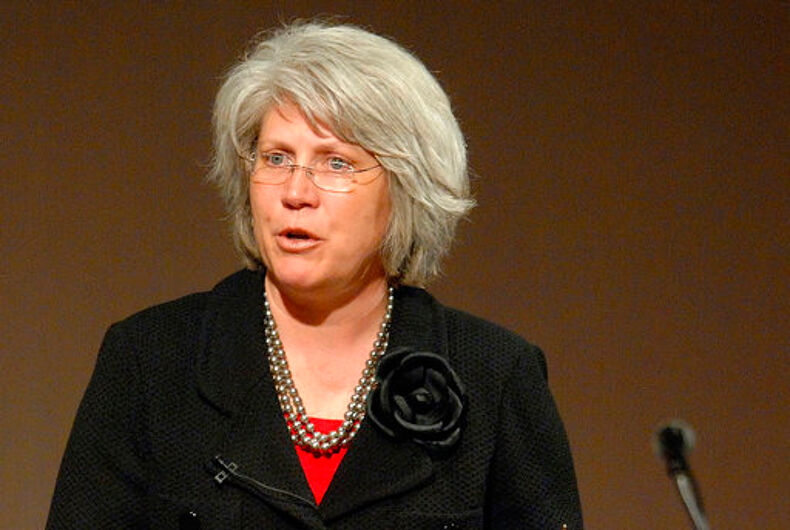 FILE - In this April 18, 2011, file photo, Jane Meyer, former senior associate athletic director at the University of Iowa, speaks in Normal, Ill. Attorneys gave closing statements Wednesday, May 3, 2017, in a discrimination lawsuit filed by Meyer against the university. Meyer filed the suit after being transferred to another department after the firing of Iowa field hockey coach Tracey Griesbaum, her partner. Meyer's job was eliminated in 2016. Photo: (Lori Ann Cook-Neisler/The Pantagraph via AP, File)

A jury on Thursday awarded more than $1.4 million to a former University of Iowa athletic administrator, ruling that the university had discriminated against her because of her gender and sexual orientation.

Jane Meyer alleged she suffered workplace discrimination as a gay woman in a relationship with the school’s longtime and highly successful field hockey coach Tracey Griesbaum, that the school retaliated against her for complaining about Griesbaum’s firing, and that she was paid less than a male counterpart for similar work.

“This is for everyone who has fought for discrimination,” Meyer said. “It’s much bigger than Jane Meyer.”

The jury began deliberating Wednesday and delivered its sealed verdict on Thursday. Meyer’s attorney, Jill Zwagerman, said she expects Iowa to appeal the verdict — partly because of the size of the award.

A lawsuit filed against the university by Griesbaum is set to begin early next month.

Meyer, who was Iowa’s top assistant and the top ranking female athletics administrator for a decade, filed the lawsuit after being transferred to another department soon after Griesbaum was fired. Meyer’s job was eliminated in 2016.

Meyer’s lawyers closed their case by bringing up a memo from Meyer to athletic director Gary Barta that outlined many of the concerns of gender and sexual discrimination that ultimately led her to sue her former employer. A day after Meyer gave the memo to Barta, she was reassigned outside of athletics.

“This is a landmark case….Jane is amazing. She stood up and fought for herself and a lot of other women,” Zwagerman said.

Meyer’s lawyers also brought up an email from the university acknowledging that it was moving Meyer from the department because Griesbaum had threatened to sue the school and that she had made their relationship public through The Associated Press.

Coaches Ferentz, Brands and Heller criticized Meyer as not being responsive to their requests, especially involving plans to improve athletics facilities. Barta testified some coaches were no longer willing to work with Meyer, prompting him to decide to hire Gene Taylor as his deputy.

Iowa Assistant Attorney General George Carroll told jurors that Meyer ultimately was moved out of the department because she had behaved “intolerably” in the months following Griesbaum’s firing. Carroll also argued that Iowa had no history of discrimination against gay coaches.

Iowa spokeswoman Jeneane Beck said the “university is disappointed by the jury’s decision” but had no further comment.

Still, the ruling was a blow to Barta, who has been with Iowa since 2006 and received a contract extension in early 2016 that guarantees him $4.6 million in compensation through 2021.

As for Meyer, she said throughout the trial that her career in athletics was likely finished no matter what the jury decided. But after winning on every count, Meyer might reconsider that stance.

“I would love for an institution to hire me. To stand up and say ‘You know what? She stood up and wants to do the right thing.'”