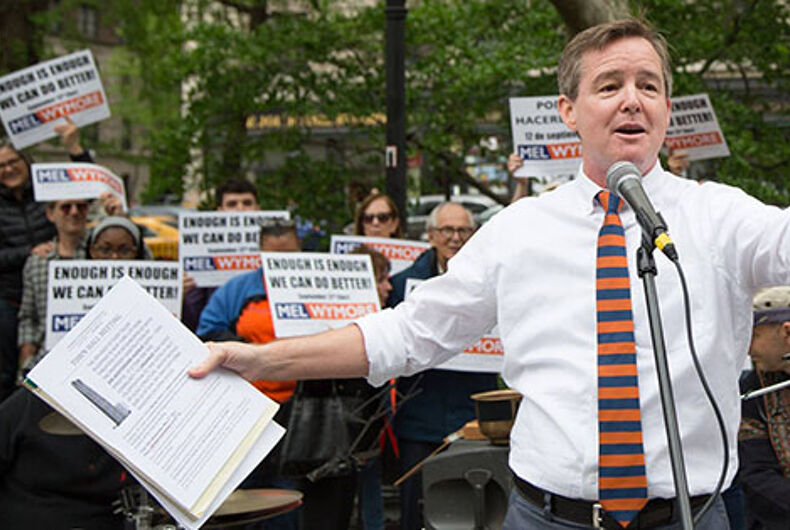 Mel Wymore, 55, is a New Yorker, a Democrat and a candidate for election to the governing council of the nation’s most populous city.

He also happens to be transgender.

The divorcé and his two adult children — ages 23 and 20 — have been through all this before, a political campaign waged four years ago, in which he received The New York Times’ endorsement.

“In 2013, I came in second,” Wymore told LGBTQ Nation last week, in a one-on-one interview on his home turf.

But Riley and Rowyn, like Wymore, were not fazed or discouraged by those 2013 results; he said they are energized like never before: “They’re not politicians themselves but they are deeply involved in the process, and are leaders in their own communities. They support me 100 percent and are on the campaign, working very hard.”

And that hard work is paying off. Wymore said the campaign is doing “very well” in a three-candidate race, headed for a primary on September 12th.

RELATED: Why did this out and proud playwright and filmmaker cast 30 actors to play his boyfriend?

“There are people who feel left out and divided,” Wymore said. “And that’s what we’re out to change. I’m an inclusive leader and I really believe in empowering all people.”

Whether it’s to shop, dine or campaign, when Wymore and his children go out and about on Manhattan’s Upper West Side — which has been his home for 29 years — observers will undoubtedly hear these “kids” refer to Wymore in a way that, even in New York City, still sometimes draws a curious look of bewilderment.

“They’re just adorable,” the Tucson transplant blushed in praising his children, and explaining his 46 years as their mom, and his own maternal instincts, were not erased by his transition. “I love my children so much!”

Way back in 1999, Melissa Sklarz was elected as a delegate to the Democratic Party’s Manhattan Judicial Convention, becoming the first transgender person elected in New York, according to The New York Times. She is now director of development for the Transgender Legal Defense & Education Fund.

Last month, former TV reporter and attorney Kristen Browde announced her bid to be town supervisor in New Castle, N.Y., a northern suburb of the city. She is the first trans candidate in New York State to run for a town office with the nomination of a major party, and like Wymore, hopes to become the first trans local official elected in the state. Wymore recently accompanied Browde as her date to the annual Inner Circle Show, a charity gala roasting Mayor Bill de Blasio and his administration that is organized by the city’s press corps.

Miami Beach bombshell: World Outgames cancels most of its events