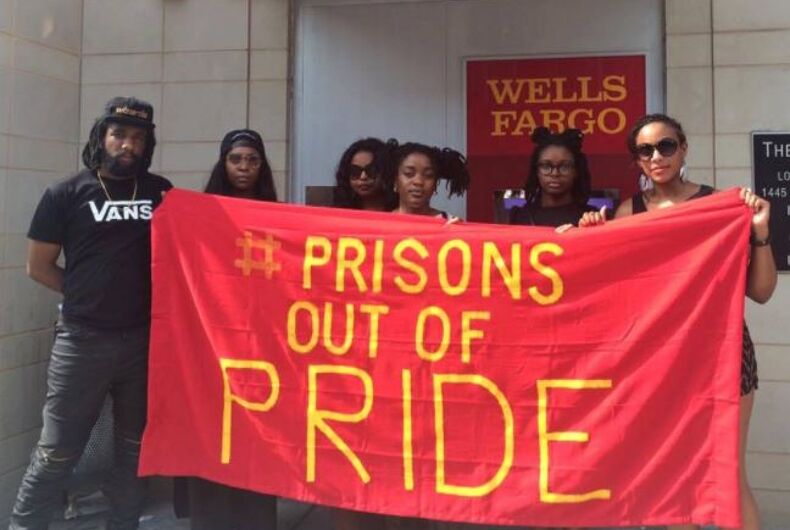 LGBTQ rights advocates have long pointed to the problematic nature of tying the fight for equality with corporations, who provide needed funds but can come with political and social baggage that increasingly cannot be ignored.

The nation’s politics has taken a hard right, and at the same time advocacy groups are recognizing that compromise may not be worth the cost.

The Human Rights Campaign recently announced it was returning $325,000 in corporate sponsorship from Bank of America for helping to negotiate the so-called “repeal” of anti-LGBTQ law House Bill 2 (HB2), House Bill 142. That law still prevents cities from enacting protections for LGBTQ people for the next three years.

HRC also downgraded its Corporate Equality Index scores for Bank of America, as well as Blue Cross Blue Shield of North Carolina, for their roles in negotiating the “compromise” that left LGBTQ people wanting yet again.

Related: People are furious that Pittsburgh Pride sold their pride march to a fracking company

In an article published Wednesday by the Washington Blade on confronting racism in the LGBTQ community, Russell Roybal, deputy executive director of the National LGBTQ Task Force, said Wells Fargo would no longer be a corporate sponsor.

Angela Peoples, the executive director of GetEqual, said the organization had called on the Task Force, and the Creating Change conference they run, to “divest from Wells Fargo because of their relationship with the Dakota Access Pipeline and to private prisons.”

“Wells Fargo has not been a direct sponsor of Creating Change in years and as of July 1, 2017 they will no longer be a national corporate sponsor of the National LGBTQ Task Force,” Roybal said.

“They remain the presenting sponsor of the Task Force Gala-Miami as they have for the last several years,” Roybal added.

“Banks like Wells Fargo boost their billion dollar bottom-line on the backs of the most marginalized in our community. It is important that LGBTQ movement leaders stand up against these practices and not allow Wells and other corporations to hide under a rainbow blanket of ‘allyship’ bought with prison and pipeline cash,” said Peoples in a statement.

“I applaud Russell and the rest of the Task Force team for making this small but important move. I hope they will join us and countless other groups to encourage broad divestment from corporations and institutions that are toxic to our communities, especially during this upcoming Pride season, with the #NoJusticeNoPride campaign.”

It seems we are entering a new era in the LGBTQ rights struggle, where corporations won’t get such an easy pass. Good PR cannot simply be bought, and actions are going to have to speak as loudly as words and oversized checks.

The Washington Blade notes that “HRC has said Wells Fargo Bank has consistently received the HRC Foundation’s highest rating for a corporation on internal personnel policies for LGBT employees.”

LGBTQ Nation has reached out to the Task Force, as well as Wells Fargo, and HRC for comment. We will update if more information becomes available.

Wells Fargo got back to us with the following statement:

We are proud of our collaboration with the LGBTQ Task Force and appreciate the great work they do for the community. Wells Fargo’s philanthropic support for the organization dates back to 1999, and continues today at the local level. Wells Fargo Foundation continues to support efforts of many organizations that provide direct services to the community, including The Trevor Project and GLSEN and we’ve recently expanded our scope to include SAGE and the True Colors Fund. Over the past 30 years, Wells Fargo has stood together with the LGBTQ community, providing over $50 million to LGBTQ-focused organizations as part of our corporate commitment, and we remain committed to delivering thoughtful and strategic support to the community in the future.

Why are Texas Republicans so obsessed with what you do in the bathroom?