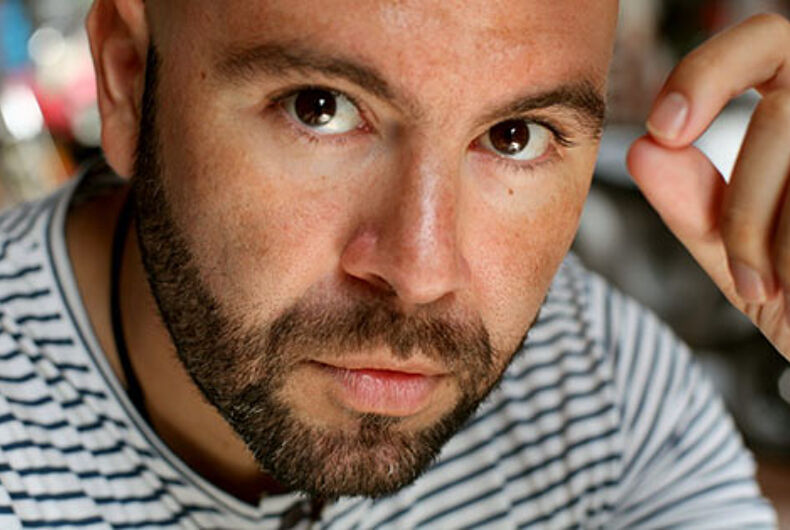 Rodrigo Bellott is not yet a household name in the United States. But the emotionally-rich play he wrote in 2015 has not only elevated him to superstar status in his native Bolivia, it’s boosting his brand here in America.

“I’ve been a successful filmmaker for a long time,” Bellott told LGBTQ Nation in an interview last week. “I made two films with Steven Soderbergh — Che (parts one and two), starring Benecio Del Toro.”

A film he made in Bolivia, Sexual Dependency, won more than 15 awards in more than 65 film festivals around the world. It was also Bolivia’s first film to be nominated for “Best Foreign Language Film” at the 2004 Academy Awards. Variety named Bellott one of its “Top Ten Latin American Talents to Watch”.

And he’s about to helm a new film starting next month based on that award-winning autobiographical work, Tu Me Manques.

“It became a sensation in Bolivia. “It’s called the ‘Tu Me Manques Effect,’ now,” Bellott said.

People started coming out immediately after the play, all over the universities, schools. It’s like a domino effect. People just started rising up. The first transgender student to stand up at a university demanded he be referred to by his proper gender. [Officials] were like, how do we do this?

Bellott and his troupe responded by offering the universities lessons on inclusion and love, and their efforts have led to scholarships both in Bolivia and soon, New York.

The play, which Bellott said is headed to Broadway in 2018, tells the story of his lost love, a man so closeted he feared even showing his arm in a photograph would alert his homophobic parents.

And those fears turned out to be well-founded.

“His mother had fake accounts on Facebook. She was trolling us,” he said. “I was so out, I would lecture him: ‘You have to be who you are. People will love you.'” But the boyfriend did not want to risk offending his parents, who Bellott said saw him as this macho, heterosexual man — not the gentle, tender gay man he was, with Bellott.

So, they communicated in French, hoping to keep their secret love from his parents. It was to no avail.

“His family found out that he was dating me,” Bellott said. “He asked me to erase him from all social media.” And so he did, but Bellott said what was there was hardly “evidence” of anything.

They had one last conversation, on Facebook. “Tu me manques,” the boyfriend told him. “I miss you,” in French.

And not long after, the boyfriend killed himself rather than face his parents.

That traumatic event left Bellott feeling “impotent,” he said. He decided to write about his feelings, first in a letter to his boyfriend, and then he changed it to what he called “a hate letter” to the man’s father.

“I was trying to tell him his son was happy, and was loved. And so that became the play.”