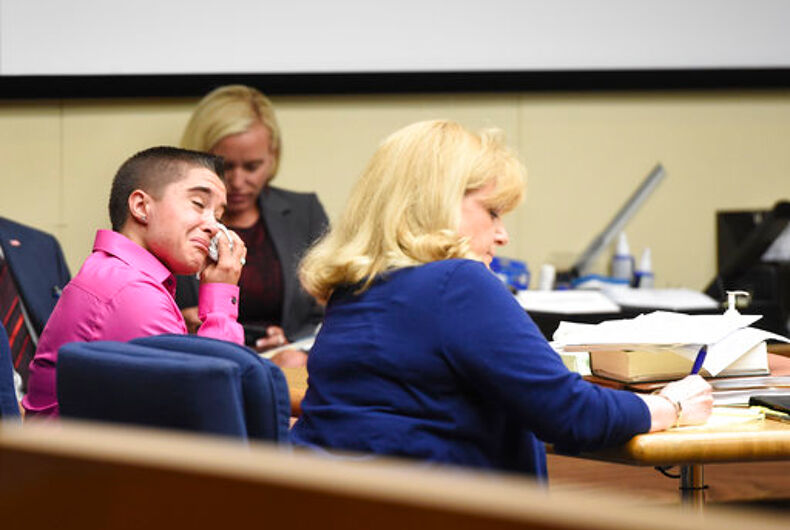 In this June 24, 2016 photo, Erica Witt, left, cries as she is denied same-sex parenting rights during a Knox County Circuit Court hearing in Knoxville, Tenn. Judge Greg McMillan opined that because she is a woman who legally married a woman, state law does not confer to her any parenting rights. At right is her attorney Virginia Schwamm. Photo: (Amy Smotherman Burgess/Knoxville News Sentinel via AP)

A judge has granted a divorce decree to a lesbian couple after a custody battle that was targeted by dozens of conservative Tennessee lawmakers who tried to intervene in the case.

The same-sex divorce and custody case became a political flashpoint after a Knoxville judge initially ruled that one of the women had no parental rights to a child conceived by artificial insemination because she did not meet the legal definition of “husband.”

The judge changed his mind, granted the divorce and approved a plan for Sabrina and Erica Witt to split custody. The attorneys for the two women did not respond to calls seeking comment Wednesday.

Their divorce came May 2 as the state Legislature was pushing through a bill that gay rights groups say encourages judges to deny rights to same-sex couples when defining words such as “husband” and “wife” or “father” and “mother.”

The case of the two women whose marriage fell apart became not just a private family matter but one where state officials repeatedly butted in.

Dozens of Tennessee lawmakers filed court papers to intervene in the case. They were represented by the head of Family Action Council of Tennessee, which supports one-man, one woman marriage. The lawmakers argued that they had to protect their ability to set domestic policy.

However, Knox County Circuit Court Judge Greg McMillan repeatedly refused to let them intervene. The Tennessee attorney general’s office also got involved in the divorce case, arguing that Tennessee law should not be interpreted in a way that runs afoul of the U.S. Supreme Court decision legalizing gay marriage.

One of the state’s largest LGBT rights organizations says the legislators should have minded their own business and not interfered in one of the most important and personal decisions a couple can make.

“What’s next?” Chris Sanders, executive director of the Tennessee Equality Project, asked. “Are they going to pick and choose other marriages and other divorces to get involved in? It’s really startling.”

But David Fowler, president of Family Action Council, said in an email that the judge was right the first time when he initially decided against one of the women and ruled that the Supreme Court decision on gay marriage couldn’t be broadened in the Tennessee case.

The lawmakers are appealing the judge’s decision denying them intervention in the case.

Fowler has said publicly that his organization is challenging the assumption that the Supreme Court ruling legalizing gay marriage changed state laws. It supported a newly enacted statute that tells Tennessee judges to use the “natural and ordinary meaning” of words that are otherwise undefined in state law. Those words include “husband” and “wife.”

The new law tries to circumvent the protections that the U.S. Supreme court gave to same-sex couples, Sanders said.

Four married lesbian couples expecting children through artificial insemination filed a lawsuit Monday over concerns that the new law could strip them of their parental rights.

Watch out! Melissa McCarthy as Sean Spicer drives her podium through NYC