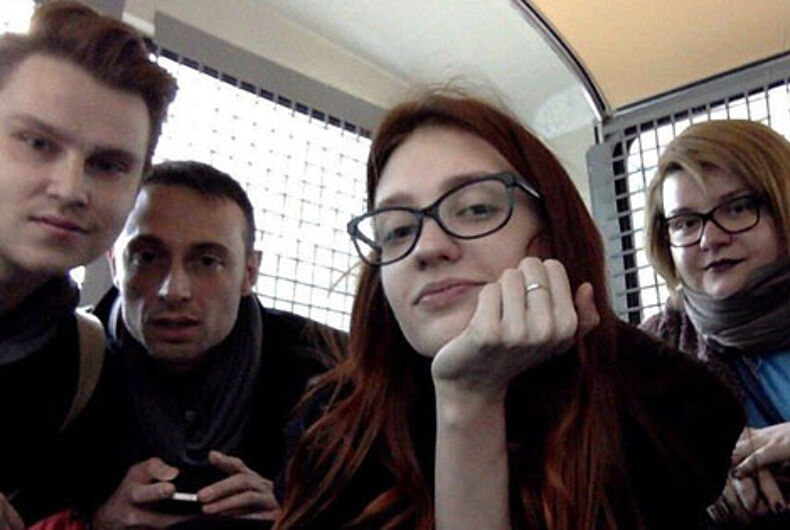 Moscow police confronted, arrested and detained several activists Thursday as they stepped out of a car with boxes containing what they said were signed petitions, demanding an investigation into the detentions and torture of gay men in Chechnya. They had begun to walk with the cartons to the office of Russia’s prosecutor general when they were stopped on the street by police.

LGBT activist Igor Yasin said they had gathered 2 million signatures to protest the treatment of gay people in the predominantly Muslim region in Russia’s south. The cartons were said to contain 400-thousand of those signatures.

The New York-based civic group Avaaz, which helped collect the signatures worldwide, said in a statement that one of the people detained in the morning was Italian activist Marina Dedales.

Avaaz’s campaign director, Bert Wander, told the Associated Press the detentions were a “blatant attempt by Russia to intimidate those standing up for gay people (which) will only draw more global attention to the horrors unfolding in Chechnya.”

The five activists detained posted a photo of themselves on Change.org, snapped inside the police vehicle taking them to be interrogated. The group’s petition on Change.org has grown at least another 25,000 signatures since then.

Campaigners have been detained in Moscow trying to deliver 400,000 signatures in support of gay men in Chechnya https://t.co/T4dIWGpQuN pic.twitter.com/ITlvBYNuJF

Russian human rights ombudswoman Tatyana Moskalkova has asked for a task force to be formed to investigate the treatment of gays in Chechnya, and President Vladimir Putin last week assured her that he would speak with law enforcement officials about the reported torture of gay men.

But according to PinkNews, one Russian Embassy official has said reports of a gay purge have been used as “a propaganda campaign against Russia around the world.”

Dmitry Alushkin, a senior figure at Russia’s embassy in Israel, wrote in a letter to the Israeli newspaper Haaretz, that there were “no victims of persecution, threats or violence” in Chechnya.

This is hardly the first crackdown on dissent and protest following the reports of Chechnya’s roundup of gay and bisexual men. Demonstrators smeared themselves with fake blood and blocked streets on May Day in St. Petersburg and several were held for hours.

This week, the Russian LGBT Network reported it had rescued 40 gay and bi men from Chechnya and was working to get them out if the country.

But it appears none of this is reaching the ears or eyes of President Trump, who met this week with Russian officials but did not discuss the problem in Chechnya according to officials.

Transgender cadets stuck in limbo, can graduate but not serve