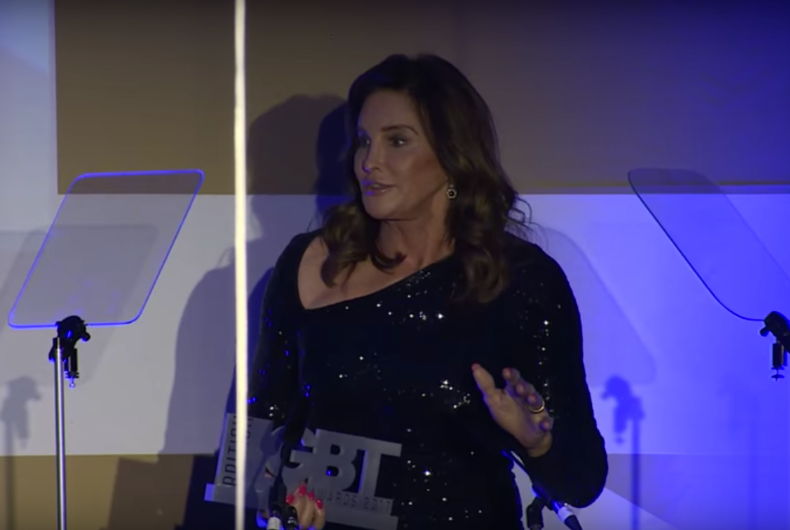 Caitlyn Jenner had just been honored at the annual British LGBT Awards on Friday, receiving the “Loud and Proud” award for her transgender advocacy work, when she faced an ugly reminder that transgender people are still more often shunned than celebrated.

As she excited the building, the reality TV star and former Olympian was confronted with transphobic abuse from paparazzi trying to get a reaction.

“One of them shouted ‘where’s your dong, fella’ and then they all started punching each other because they were so desperate for a photo,” one witness, Cameron Fallow, told The Huffington Post.

A friend added that the paparazzi were also addressing Jenner as a man.

“Someone shouted to her, ‘Oi, Bruce, get your dick’ out,” an unnamed witness reportedly told The Sun Online. “Then someone else threw something at her. It was horrible.”

Police are investigating the incident as a hate crime

“Officers attended and spoke to one of the organisers who alleged that a photographer had verbally abused a woman and a man as they were leaving the event,” Scotland Yard said in a statement. “No arrests have been made. Enquiries are ongoing.”

The abuse served as a reminder of the challenges LGBTQ people must overcome on their way to success.

“The new challenges facing the LGBT community all over the world mean that these awards are more important than ever, so it has been wonderful to celebrate such inspirational role models who send out a positive message to people everywhere that being LGBT is not and should never be a barrier to success,” said awards co-founder, Sarah Garrett. ‘That is what the British LGBT Awards is all about.’

Tom Daley and husband Dustin Lance Black were also honored at the event, jointly receiving the “Influencer of the Year” award.

Watch the full awards show below.