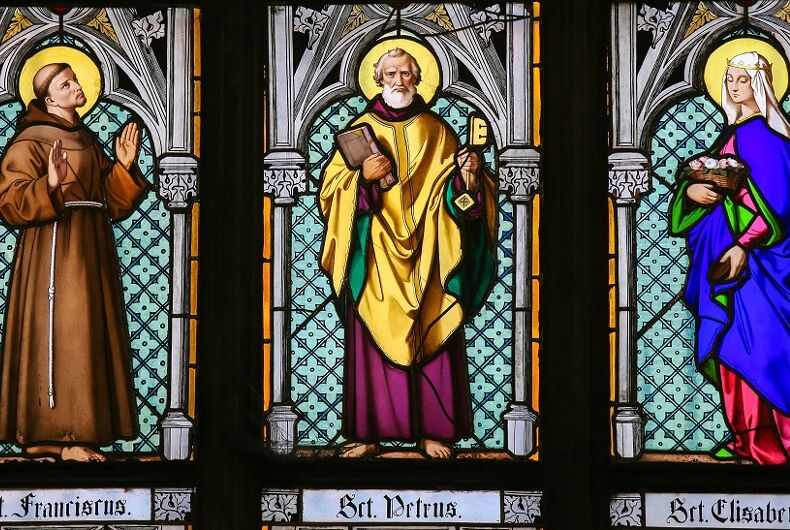 Basing itself upon Sacred Scripture, which presents homosexual acts as acts of grave depravity, tradition has always declared that homosexual acts are intrinsically disordered. They are contrary to natural law. They close the sexual act to the gift of love [i.e., children]. They do not proceed from a genuine affective and sexual complementarity. Under no circumstances can they be approved.

So if the Roman Catholic Church declares that “homosexual acts are acts of grave depravity” and “are intrinsically disordered” and therefore, “[u]nder no circumstances can they be approved,” then how will Church officials and laypeople alike counter the cognitive dissonance aroused by Jesuit priest, Father James Martin SJ based in New York City, who announced this past April on his Facebook page when referring to Catholic saints: “Some of them were probably gay. A certain percentage of humanity is gay, and so were most likely some of the saints. You may be surprised when you get to heaven to be greeted by LGBT men and women.”

While others both inside and outside the Church have made similar claims in the past, what makes Fr. Martin’s assertion particularly notable is that he currently serves as the Vatican’s officially-appointed consultant on LGBTQ issues, who has ignited a virtual firestorm among the flock.

The Church can square the good Father’s statement in several ways. The most obvious way is to clarify that Fr. Martin does not maintain that these supposed “gay saints” engaged in “homosexual acts.”

Homosexual persons are called to chastity. By the virtues of self-mastery that teach them inner freedom, at times by the support of disinterested friendship, by prayer and sacramental grace, they can and should gradually and resolutely approach Christian perfection.

In this regard, Pope Francis wrote on the archdiocesan website, July 1, 2016:

The number of men and women who have deep-seated homosexual tendencies is not negligible. This inclination, which is objectively disordered, constitutes for most of them a trial. They must be accepted with respect, compassion, and sensitivity. Every sign of unjust discrimination in their regard should be avoided. These persons are called to fulfill God’s will in their lives and, if they are Christians, to unite to the sacrifice of the Lord’s Cross the difficulties they may encounter from their condition.

How can one seriously reconcile the Church’s paradox, though, by labeling us as “objectively disordered” on one hand while calling for acceptance “with respect, compassion, and sensitivity”?

As historians know only too well, the times and cultures in which the saints lived severely condemned and criminalized same-sex sexuality with penalties ranging from social ostracism, to flogging, incarceration, and death. The Church itself also inflicted many of these penalties on the accused in addition to excommunication and defrocking.