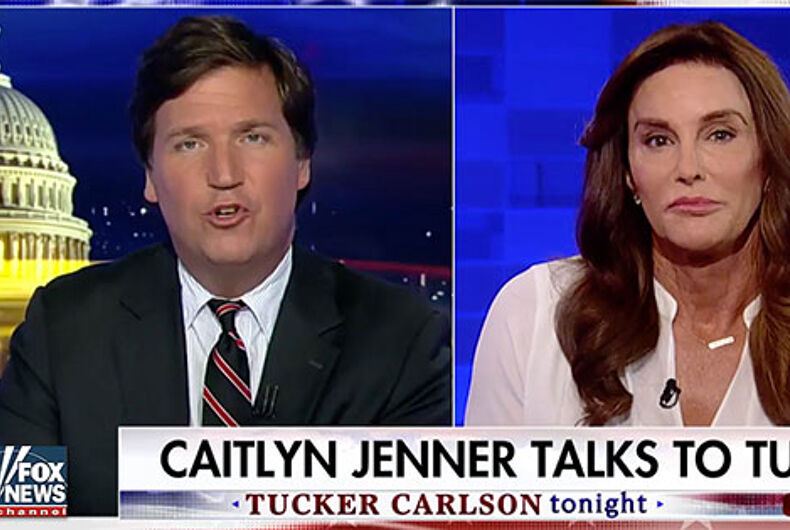 Lifelong Republican Caitlyn Jenner might have anticipated a more friendly exchange when she agreed to be interviewed by conservative pundit turned television host Tucker Carlson, about her memoir released Tuesday: The Secrets of My Life. She even seized the opportunity to confirm what every LGBTQ person in America already suspected, that she cast her vote last November for Donald Trump.

Within the first few minutes, however, she revealed the president had “kind of disappointed me in the first hundred days,” and so the title bout began, to decide who would score the most knockout punches.

The first episode of Tucker Carlson Tonight opened with his tribute to the previous 8 o’clock host, perennial ratings king and accused sexual harasser of women Bill O’Reilly, and a poll that if the election were held today, Trump would beat Hillary Clinton in the popular vote. But then came the fireworks in the show’s second half hour, when Carlson welcomed Jenner to his new program.

And the transgender former Olympian did not miss most opportunities to score points for what she repeatedly called “my community.”

Carlson, however, did catch Jenner in one of his famous and usually unsuccessful attempts at circular reasoning. He argued that the concept of hate crimes is inherently biased and therefore unnecessary, because it should be “just enough to prosecute someone for murder.”

“Everyone’s an American, and all lives are equal, the lives of transgender people, and the lives of, the lives of everyone are equal,” Carlson stated. “Why wouldn’t it be enough to prosecute someone for murder?”

Jenner replied smartly, at first, citing the first prosecution of a hate crime and then making a statement in support of the most marginalized of the marginalized.

“Too many times, trans women who are murdered,” said Jenner.

They’re almost brushed off to the side. A lot of times, they think, ‘Meh. It’s only a trans woman. Look what she was doing,’ or make excuses. And that’s not the case. We need to protect all Americans, including my community. It’s important that we get serious.

“Well, I agree with you,” Carlson replied, which was unexpected. But he wasn’t finished with his sentence.

“The first part, completely, where you said it’s important to protect every American. But put yourself in the position of someone else,” he said, setting her up for his trademark logical fallacy.

“If someone you love were killed, and the murderer received a lesser sentence because their loved one was not a member of the trans community, you’d say, ‘that’s kind of unfair.’ We’re all Americans.”

That’s when Jenner took the bait.

She did try to save herself by citing the epidemic-like murder rate, and changing the subject to Tennessee State Sen. Mark Green, Trump’s nominee for Secretary of the Army.

This guy has come out with some of the most anti-LGBT statements ever, calling me, a trans person, as a ‘disease.’ I hate to tell Mark Green, ‘I don’t have a disease.’ Okay? He called fighting the bathroom issue as, ‘The Bible tells me I have to go after evil.’ I’m not an evil person.

Carlson stated, “I don’t think anyone’s suggesting you’re an evil person.” And when the conversation shifted to the subjects of faith and biology, Jenner had her best moment: she brought up a now infamous interview Carlson conducted with the executive director of Transgender Legal Defense and Education Fund, and the look on his face as she recounted what he claimed was priceless.