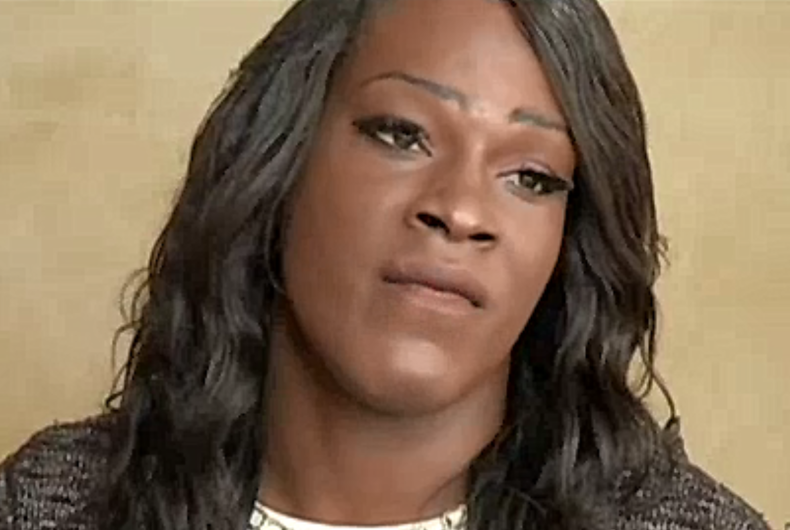 A transgender woman in South Florida is facing a charge of murder in a case that she says was self-defense.

The woman, identified in local media only as Ms. Campbell, said that Jackson Marcelin had been stalking her and repeatedly approached her for sex, even after being refused.

One witness told the court, “Prior to the incident I observed the victim, Marcelin Jackson…harassing my roommate Lloyd for at least 2-3 months. During the harassment, Marcelin would approach Lloyd with comments such as ‘I want to have sex’ and ‘I want you to (expletive) my (expletive).'”

At one point, Marcelin approached Campbell with a wooden board while she had a knife in her hand.

“I literally did feel I was defending myself. I actually got struck by the board,” she told NBC Miami.

Court documents show that another witness saw Marcelin with with a “wooden stick” but also said that Campbell was “taunting the victim.”

Campbell is now facing a charge of second-degree murder for the stabbing death of Marcelin.

She says that she had been raped three times prior to this incident. Even while she was being held on these charges but before she was released on bond, Campbell was attacked by fellow inmates and is now a witness for the state attorney in that case.

“I have seen things happen to other transgenders who could not defend themselves,” she said.

Campbell and her attorney think that the situation would be different if she were a cisgender woman. “I do feel like that it may have been different if it was a woman in my situation,” Campbell said.

“I think it’s without question that if he were a biological female this case would be handled differently,” her attorney Herbert Erving Walker III said.

The Miami-Dade State Attorney said that information is still being gathered to determine how they proceed in court.

Chelsea Clinton is not running for President in 2020