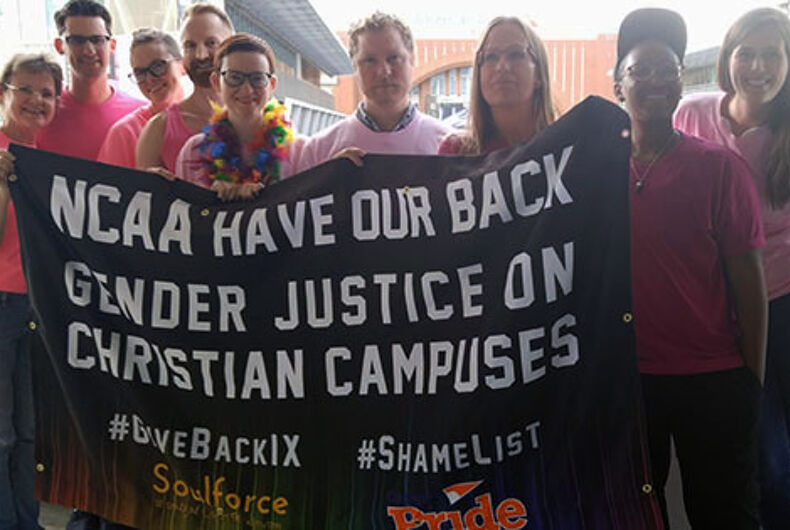 A demonstration in support of transgender students at the NCAA Women’s basketball championship tournament ended with police and arena security intimidating, detaining and ultimately ejecting the pink-clad protesters and threatening to charge them with criminal trespassing — even though each of them had tickets to the game.

The demonstrators were a combined effort by Campus Pride and Soulforce, a nonviolent pro-LGBTQ group, both calling on the NCAA to reject the waivers requested by more than two dozen member schools, for Title IX exemptions. The waivers would grant the Christian-based schools the legal right to discriminate against transgender and pregnant students, through discipline, expulsion, or termination.

“The NCAA still has 30 schools that actively sought the right to discriminate against women, trans, and queer people on their campuses,” said Yaz Mendez Nuñez, Soulforce Programs Director, in an emailed statement. “Those schools are not in line with NCAA values and they are not safe places to host NCAA games.”

30. That's the number of schools in the NCAA that actively discriminate against LGBTQI people. #GiveBackIX #WFinalFour pic.twitter.com/XlGj0hWhfH

The protesters told their story in live tweets and a cellphone video uploaded to YouTube, after arriving Sunday at the Women’s Final Four at the American Airlines Arena in Dallas.

Now seated in all our sections at #wfinalfour. Made it with our cute posters after a grilling. #givebackix

Two of our teammates went to get a drink and were questioned AGAIN by police.

Lifted our banner. "NCAA have pur backs" during halftime. Being detained. Not given a trespass warning.

Told we may be charged. No treapass warning. We are willing to comply with a warning and leave the venue.

Cops snatched the banner out if our hands. Detained our banner holders ans even the person taking film of our action.

Promised to press charges, took us to the control room, and took our id's and tickets. Made us sweat it out for 15 min.

Ultimately decided to release us and follow protocol since there was no trespass warning.

When ejected, we told 8 cop escort that our people are dying & we have to do this work to be right with our souls and get our people free.

Banner was given back and @SoulforceOrg was ejected without any charges pressed. #GiveBackIX

Haven Herrin, the director of Soulforce, whose hometown hosted the tourney, denounced the NCAA for being shortsighted on Title IX protections as well as the non-repeal of North Carolina’s House Bill 2.

That the NCAA has member universities that discriminate against their own students is exactly why it finds itself ensnared in legal battles like the repeal of HB2.