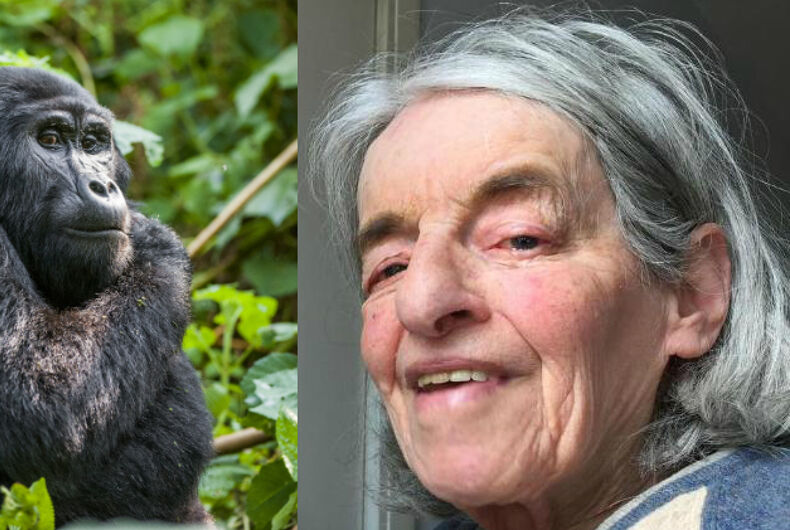 A candidate for the Glasgow Council recently compared being gay to her own sexual attraction to gorillas and the internet is not going to let her live it down.

Gisela Allen is a member of the Ukip political party whose primary platform was pushing for Brexit, the British exit from the European Union. In an interview with the Sunday Herald, the 84-year-old elaborated on her political views, including a statement in a local newspaper that touched on her views on LGBTQ issues: “I don’t want any LGBT community — it’s private life, none of anybody’s business.”

Apparently, Allen believes that LGBTQ people should keep quiet about their sexuality. And to illustrate that belief, she offered an unexpected comparison. While it’s not unheard of for haters to make false comparisons between being gay and bestiality, they don’t usually use themselves as an example.

“I am not anti-gay – but how can you call that a community? Sex life is everybody’s private affair. You do not come out and declare openly,” she told the Herald, after sharing that she started volunteering at the zoo after her husband died. “Do you think I am going all over the city and saying my idea of a sexually-attractive creature is a gorilla? When I go to a zoo and I see a gorilla my hormones go absolutely crazy. I find a gorilla very attractive.”

Allen also advocated for the return of the guillotine, euthanizing the elderly and sick, and revoking child care funding to force mothers to stay home with their children.

“The main purpose of the law is to protect the public. If I could get the guillotine, lethal injection or firing squad I would gladly have it. I would also castrate violent criminals. You castrate bulls, horses, dogs – it takes the aggression away. Moreover, these violent criminals can’t have any more children themselves. And I am all for the cat o’ nine tails,” she explained. “You like violence? Well let’s see how you like to be on the receiving end.”

In the interview, Allen said that she believes her views will be popular, even if her fashion sense isn’t up with the times.

“As long as we have democracy I can stand in the street and say aloud what I think,” she said. “A lot of people love me. I get kissed and cuddled in the street. It takes me ages to get home.”

But not everyone is a fan.

Bill Kidd, who represents Glasgow in the Scottish Parliament,  called Allen’s remarks “outlandish ” and said they were a “manifestation of all that makes her party so very unrepresentative” of voters.

According to an aide to Ukip MEP David Coburn,  Allen’s views “do not reflect official party policy.”