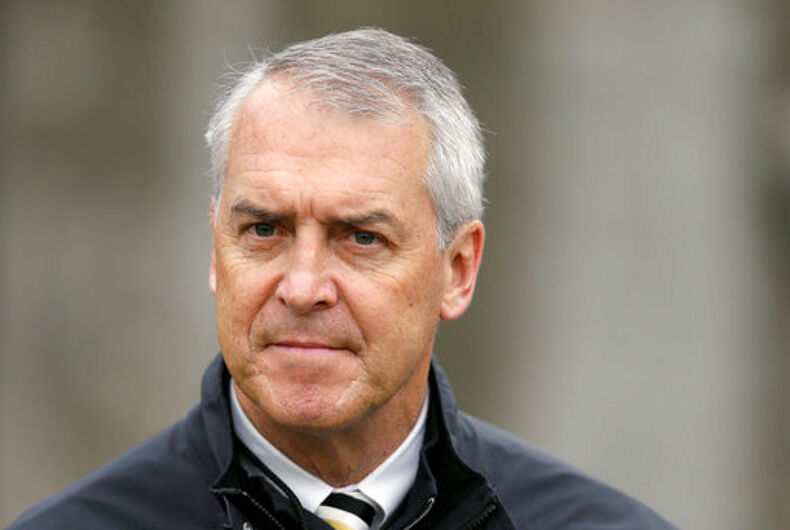 FILE - This is an Oct. 31, 2015, file photo, shows Iowa Athletic Director Gary Barta on the field before an NCAA college football game in Iowa City, Iowa. A trial beginning Monday, April 17, 2017, centers on a claim by Jane Meyer, Iowa's former senior associate athletic director, that she suffered discrimination as a gay female who fought bias in college sports. The trial is expected to litigate whether Barta's personnel moves were tough-but necessary judgment calls or tainted by discrimination. Photo: AP Photo/Charlie Neibergall, File

University of Iowa athletic director Gary Barta testified Friday that his relationship with a former top administrator deteriorated after Barta informed her that after a reorganization of the athletic department, she no longer would be his second-in-command.

Testifying in a discrimination lawsuit filed by that former administrator, Jane Meyer, Barta said the two initially had a strong working relationship but that she became antagonistic after he told her in 2013 that he’d look for a new deputy director. Barta said part of the basis for his decision was his belief the head football and wrestling coaches wouldn’t support Meyer as the deputy.

Meyer, who had reported directly to Barta since 2006, filed a lawsuit after being moved to another department soon after the firing of her partner, Iowa field hockey coach Tracey Griesbaum. Meyer’s job was eliminated in 2016.

Meyer’s lawsuit alleges she suffered workplace discrimination as a gay woman in a relationship with a coach, that the school retaliated against her and that she was paid far less than a male counterpart for similar work.

Barta said he had heard reports that Meyer had a “heavy-handed” style that had irked Iowa coaches throughout her tenure. Barta said wrestling coach Tom Brands told him that Meyer “treated him like a child” and that football coach Kirk Ferentz made clear he didn’t want to work with Meyer.

Barta said his conflicts with Meyer worsened after he fired Griesbaum.

Barta said that while a university investigation cleared Griesbaum of any policy violations, the inquiry raised a number of issues that concerned him.

Meyer earlier testified that Barta told her she needed to support Griesbaum’s termination — a move Meyer disagreed with because she believed Griesbaum was one of the school’s top coaches.

Barta also said he was angry that Meyer and Griesbaum acknowledged their relationship in the media soon after the firing and without informing him directly. Meyer has said she assumed Barta already knew they were together.

Barta acknowledged he had heard rumors of their relationship as early as 2011 but had never confirmed them.

A day after Meyer gave Barta a memo detailing concerns she had both personally and within the athletic department in December 2014, Barta told her she was being transferred out of athletics.

Barta said Friday that Meyer’s behavior in the wake of Griesbaum’s dismissal had created “incredibly difficult times” for his department.

“I wasn’t planning to fire her, but I had to do something. Her behavior was restricting my ability to run the athletic department,” Barta said.

Barta will resume his testimony Monday.

Meyer maintains that Barta’s decision to move her out of a sports-based position destroyed her dream of someday becoming a Division I athletic director.

Meyer testified Friday that she has applied for multiple job openings in athletics since being fired by Iowa but that suing her former employer has taken her out of the job pool.

“No one will touch me,” Meyer said.

Meyer is seeking compensation since being terminated at a rate equal to Gene Taylor, the man who succeeded her and was recently named the athletic director at Kansas State University.

© 2017, Associated Press, All Rights Reserved.
This material may not be published, broadcast, rewritten, or redistributed.
Life
Jane Meyer, University of Iowa, workplace discrimination

Scottish council candidate compares being gay to her attraction to gorillas