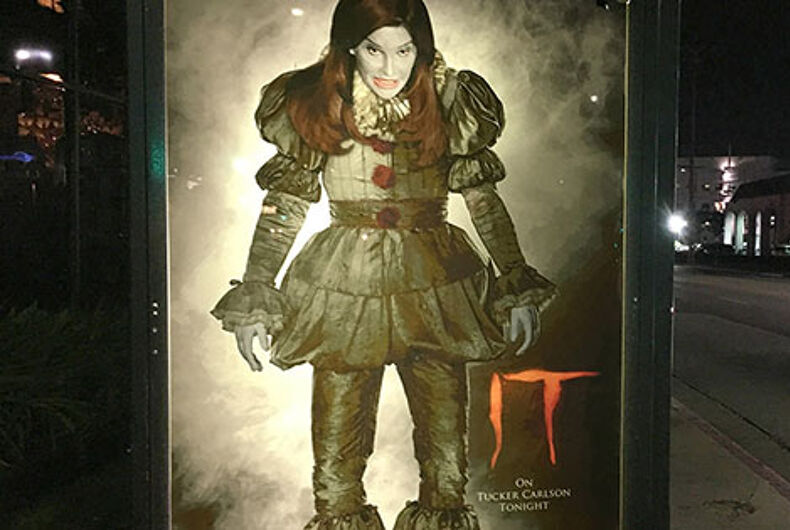 A man described by The Hollywood Reporter as a “conservative street artist” plastered posters and bus bench ads that spoof Monday night’s appearance of Caitlyn Jenner on the debut episode of Tucker Carlson’s new show on Fox News.

The phony ads appeared Monday outside the Fox studios in Los Angeles, and featured Jenner’s head in the place of Pennywise, an evil clown character from a forthcoming film based on the 1986 book by Stephen King. Like the novel, the movie is called IT, a word that is too often used by transphobes to describe a transgender person.

In an email, Sabo told LGBTQ Nation he considers himself an ally of “the gay community.” But apparently not the trans community, as he repeatedly deadnamed the transgender former Olympian in his comments to us and The Hollywood Reporter.

“I converted to the Muslim faith and I joined ISIS, so what’s going on with Bruce Jenner goes against my new-found faith,” Sabo told THR. “If any progressives have a problem with this poster, then I’ll just have to label them ‘Islamophobic.’

“This poster pales in comparison to throwing Bruce off a building or hanging him the way we Muslims do in many countries, and progressives don’t seem to have a problem when we do that,” Sabo added.

Sabo is the artist responsible for the “Shoot Back” posters that appeared in West Hollywood following the massacre at Pulse in Orlando, Florida. LGBTQ Nation reported on the controversial displays and Sabo boasted about his work on his website, even including a TV news report on the posters that he shot with a mobile phone trained on his television.

Jenner is hardly the first target Sabo has mocked. His website, Unsavory Agents, also sells spoof posters of Hillary Clinton, Bernie Sanders and Ted Cruz. And as a conservative, his art is supportive of President Trump, who he portrays as a “24” anti-terrorist hero, here to save the day.

Sabo knows Carlson. He appeared on his Fox News show back in February to discuss the anti-Hollywood posters he put up outside the theater where the Academy Awards were held.

Sabo told LGBTQ Nation in an email he had actually planned to cancel the whole thing, calling it “cruel,” but reconsidered because of “‘progressives’ trying to normalize transsexualism.”

“Please know, not that I’d expect you to believe me, but I don’t hate or even have any more of a problem with the gay community than I have for any other,” Sabo told LGBTQ Nation.

I just don’t see the need to “normalize” a behavior that is anything but. Who the hell wants to be normal anyway. I thought that was what the mohowk [sic], piercing and blue hair were all about.

The night before I was going to cancel this creative hit because I felt it was cruel and honestly I felt happy that Mr. Jenner managed to find peace in his life. Who am I to question that. But then I remembered my beef with the whole issue was “Progressives” trying to normalize transexualism but making it so these men can use the same restrooms as women. I remembered on some occassions some perverts using this excuse to stalk little girls in the restrooms. Shit, I can’t even go to Target anymore because my wife refuses to shop their because of their gender neutral restroom policy. I fucken dig Target!!! How did shopping there become an issue?!

But anyway. Try not to butcher me too much. I have many gay friends who are the best people and believe it or not I’ve come to bat for many of them when they were attacked or criticized.

Sabo concluded his email with a request that we view a video he made with a title containing two words we don’t condone, the F-word and the N-word. Curious readers are welcome to see for themselves and add your comments below.