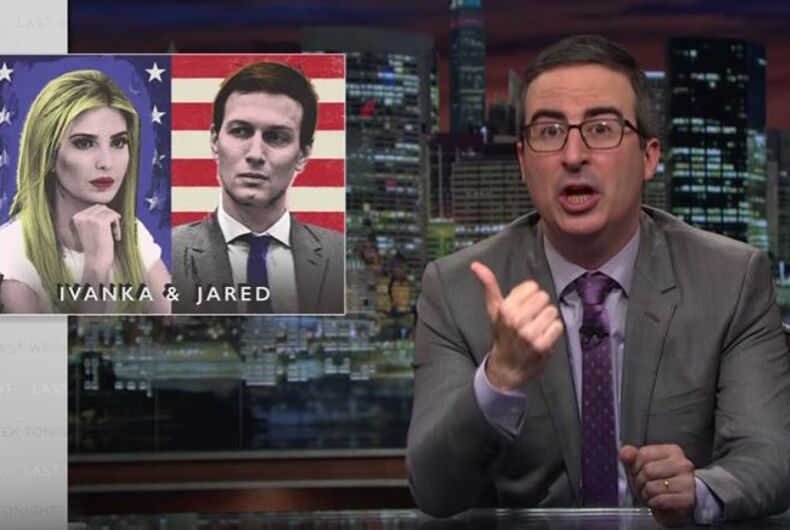 John Oliver questions if Ivanka Trump and Jared Kushner have any business being in the White House.Photo: YouTube Screenshot

President Donald Trump has given his daughter Ivanka and son-in-law Jared Kushner positions of power in his administration despite their lack of former experience in politics or the topics on which they advise the president.

And while many like to think of Ivanka Trump and Kushner as moderating influences on the fiery president, offering a counterweight to far-right influences like Steve Bannon, with whom Kushner has battled, just how much do we really know about either of them?

As Oliver points out, Ivanka wrote in her 2009 book The Trump Card: Playing to Win in Work and Life shows the apple didn’t fall far from the tree when it comes to an ability to play fast and loose with the truth:

Then there’s Kushner, tasked with everything from finding peace in the Middle East to ending the opioid epidemic, whom Oliver argues is highly overrated.

For instance, his supporters, including President Trump, often point to his education. He went to Harvard, yet officials at his high school were reportedly “dismayed” he was admitted, as “his GPA did not warrant it, his SAT scores did not warrant it.” It just so happens that Kushner’s father donated $2.5 million to Harvard the year his son applied, as well as making separate donations to Cornell and Princeton.

He also seems to get a lot of credit simply for sitting in meetings with his mouth shut.

Watch Oliver lay out the case for why, “If they are the reason you are sleeping at night, you should probably still be awake.”